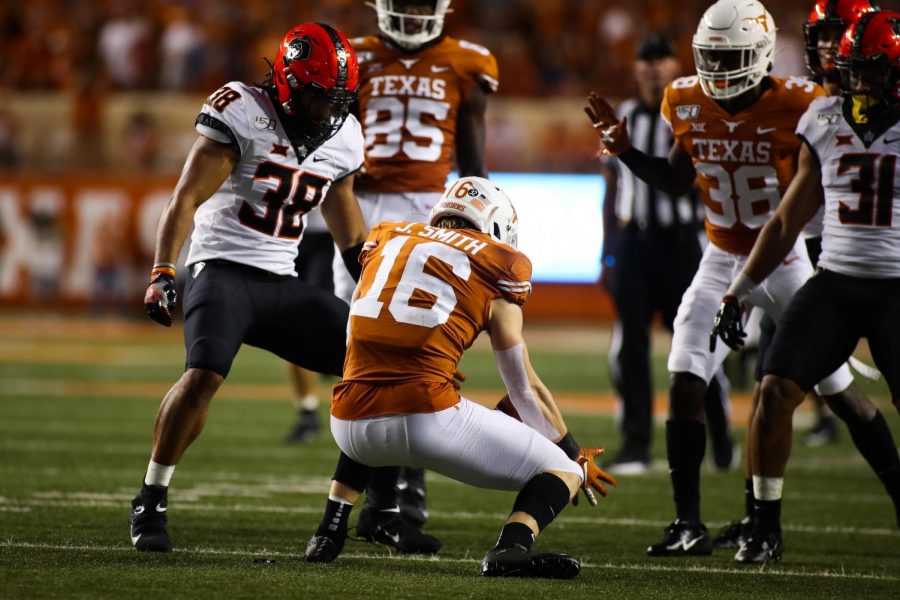 The Texas football program received two waves of news this summer that have weakened the depth of their wide receiver room.

Junior wide receiver Jake Smith, a former four-star prospect in the class of 2019, entered his name into the transfer portal on June 22 after posting 568 receiving yards and nine touchdowns in two seasons. Smith missed all of spring practice with a broken foot, but figured to play a big role in head coach Steve Sarkisian’s offense this season. On the same day, Sarkisian released a statement that he had indefinitely suspended incoming freshman wide receiver Keithron Lee from all team activities following an arrest for assault of a family member. Following these two developments, Texas’ wide receiver situation is much murkier than originally thought.

Out of the top four receivers from last year’s team, only junior Joshua Moore returns. Moore led the team with 30 receptions, 472 receiving yards and nine touchdowns, and figures to be a shoo-in for a starting role. But with the departures of Brennan Eagles and Tarik Black to the NFL and Smith’s decision to transfer, the depth chart behind him is up in the air.

Sophomore Jordan Whittington came into the program along with Smith in 2019 as a five-star recruit, but injuries have plagued his career so far. Whittington has caught only 23 passes in two years. Junior Kai Money started 2020 on fire, catching four passes in each of the Longhorns’ first two games, before catching only two passes for the rest of the season. Redshirt freshman Kelvontay Dixon was buried on the depth chart as a freshman and only played in three games, but he caught a 73-yard touchdown from Casey Thompson in the Alamo Bowl and gave Texas fans hope for a future connection between the pair. Brendan Schooler caught 12 passses for 140 yards last year, but the senior made the transition to safety in the spring and is a likely starter on defense. The only other two receivers to record receiving statistics last year were juniors Al’Vonte Woodard and Marcus Washington, who each caught four passes.

The Longhorns do have some incoming freshman wide receivers who could make a difference, most notably Xavier Worthy, Jaden Alexis and Casey Cain. Worthy is a speedster and the No.8-ranked receiver in the class of 2021. The 6-foot-1, 160-pound receiver committed to Texas during the Orange-White Spring Game after Michigan released him from his signed letter of intent. Alexis is a four-star wide receiver from Florida and Cain is a three-star receiver from Louisiana.

Redshirt freshman wide receiver Troy Omeire turned heads in spring practice after missing all of last season with an ACL tear. Omeire made a push in last season’s fall practice to become an early starter before his injury, and his big frame at 6-foot-3 gives the Longhorns another deep threat along with Moore.

While there are question marks at this position, Sarkisian has shown proficiency in developing wide receivers. In his two years as the Alabama offensive coordinator, Sarkisian helped produce four first-round NFL Draft wide receivers in Henry Ruggs, Jerry Jeudy, Jaylen Waddle and Devonta Smith. At his first head coaching job at the University of Washington, Sarkisian coached Jermaine Kearse, a top receiver on a Seahawks team that made the Super Bowl in back-to-back years as well as NFL speedsters Marvin Hall and Jaydon Mickens. In his brief stint at the University of Southern California, Sarkisian helped develop a first-round receiver in Nelson Agholor and pro-bowl receiver Juju Smith-Schuster.

While losing Jake Smith and Keithron Lee is a blow, there are still players that can step up and be producers for this team. The success of Texas’s offense depends on how well the inexperienced players can develop under Sarkisian’s guidance.