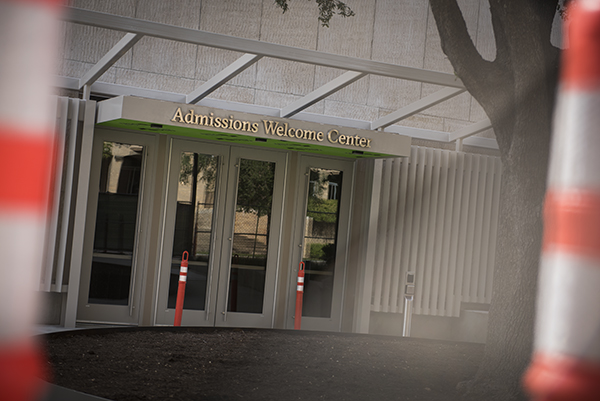 Editor’s Note: This article first appeared as part of the June 28 flipbook.

Some members of Texas Tour Guides have boycotted work since May 1 in protest of “The Eyes of Texas” lyrics being featured in the Admissions Welcome Center display. They say they will not return until UT removes the lyrics but have received little communication from UT leadership.

The University said it would review the display of the lyrics this summer, according to a letter to the welcome center staff by Miguel Wasielewski, executive director of admissions at the Office of the General Faculty. University spokesperson J.B. Bird confirmed with The Daily Texan on Monday that this review process has begun.

Wasielewski also said in his email they will be providing tour guides with “additional training for questions related to ‘The Eyes of Texas’ to assist with a positive tour experience for our visitors.”

Chemistry senior Avery Thompson, who is currently on strike, said before the new class of tour guides who began working in May, the office had to bring in people from other UT campuses and leadership to give tours.

Thompson said the lack of communication between the guides and University officials is disheartening and makes her feel disrespected. She said the tours have leveraging power because of their direct contact with prospective students.

Jeremiah Baldwin, a government, rhetoric and writing and African and African Diaspora studies junior, also said not getting much response and communication from University officials made it difficult to continue being a tour guide and represent the University in a positive light.

When UT President Jay Hartzell announced the alma mater will continue to be the school’s song in July 2020, Hartzell said, “‘The Eyes of Texas’ should not only unite us, but hold all of us accountable to our institution’s core values,” and that the UT community needed to have conversations regarding the song.

In March, the University released a 59-page report detailing the history of “The Eyes of Texas,” which stated the song was written in a “racist setting” but is not “overtly racist.” Since then, history professor Alberto Martínez released multiple articles on Medium contradicting the report and listing reasons why it should not be the University’s alma mater.

“I’m sick and tired of having conversations,” Thompson said. “It’s not a conversation that needs to be had anymore, in my opinion, because it’s very clear that this song is actively harming Black students on campus.”

When the lyrics were placed in the welcome center, the history of the song was not as well-known to students. The reports released over the past year brought the history to the forefront and influenced many students to fight for change.