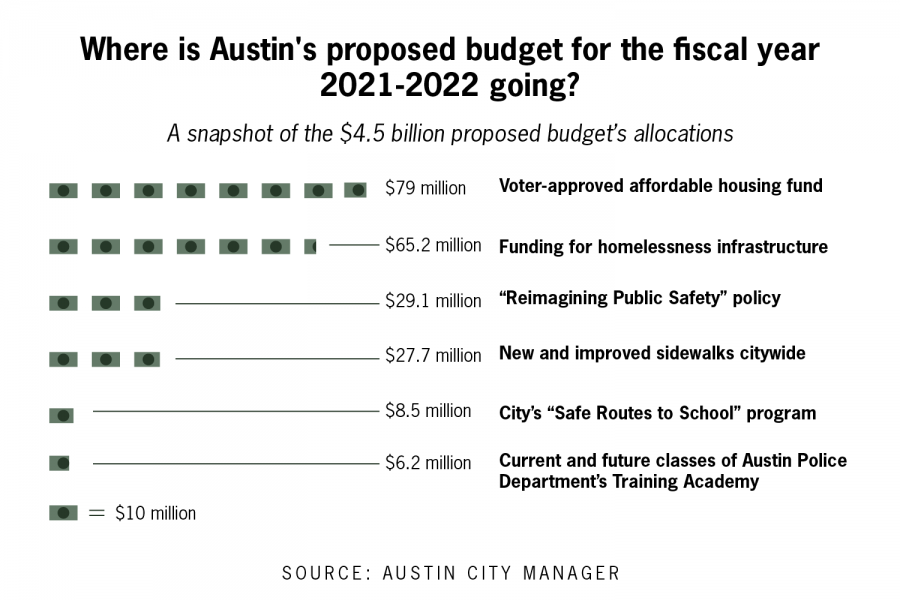 The newly proposed Austin city budget includes the largest Austin Police Department budget yet, despite cuts and calls from the community to diversify spending through ‘Defund the police’ protests last year.

Last year, the city council unanimously voted to cut one third of the police budget. However, in compliance with a new law, HB 1900, which fines cities for defunding the police, the proposed budget will increase the funding of the police department by allocating funds up to $442 million, $10 million more than the 2019-2020 police budget, said Kerri Lang, Austin’s interim budget officer.

“When that law was passed, we as a city looked at what our budget was for police and looked at how we could relocate those funds back into the police department, so that we would not be tagged as a defunding city,” Lang said.

City Manager Spencer Cronk proposed a $4.5 billion budget for the fiscal year 2021-2022 on July 9. Within the budget, $65.2 million will fund the City’s response to homelessness, $29.1 million will go to Reimagining Public Safety efforts and $6.2 million will fund the current and future classes of the Austin Police Department Training Academy. However, as crime rates rise in Austin, emergency responders were not granted additional funds.

Cerena Ermitanio, co-chair of UT-Austin’s chapter of Young Democratic Socialists of America, said she finds the budget increase to be disappointing and undemocratic.

“How is this actually benefiting people?” said Ermitanio, an international relations and global studies senior. “I think to answer that issue, as a democratic socialist, is to think about how democratic it is to ask that everyone funds the police when we do have the alternative to that, which is to actually fund our public services to prevent lots of the crime that police claim to respond to.”

Lang said one of the top priorities of this budget was to reimagine public safety. Last year, the city council started the Reimagine Public Safety effort as a way to allocate money to different departments that would have a better fit in some areas than the police, she said.

“Some of the things that they were looking at is (whether we are) providing the right level of mental health services and those kinds of things, so that the function of the police can focus on their core function of patrol and the types of responses that is core to their service,” Lang said.

Selena Xie, president of the Austin EMS Association, said she is disappointed with the city’s proposed budget as EMS did not receive any new funding despite the pandemic, winter storm and the Sixth Street shooting highlighting the need for more resources.

“We need to bolster our EMS system in order to take care of people in this new future that we’re living in,” Xie said. “We are not doing that. We are acting as if things are the same, and this budget reflects that. This budget did not add anything new that was not supposed to be added five years ago.”

The city council will review the budget on August 11 with input from the community.