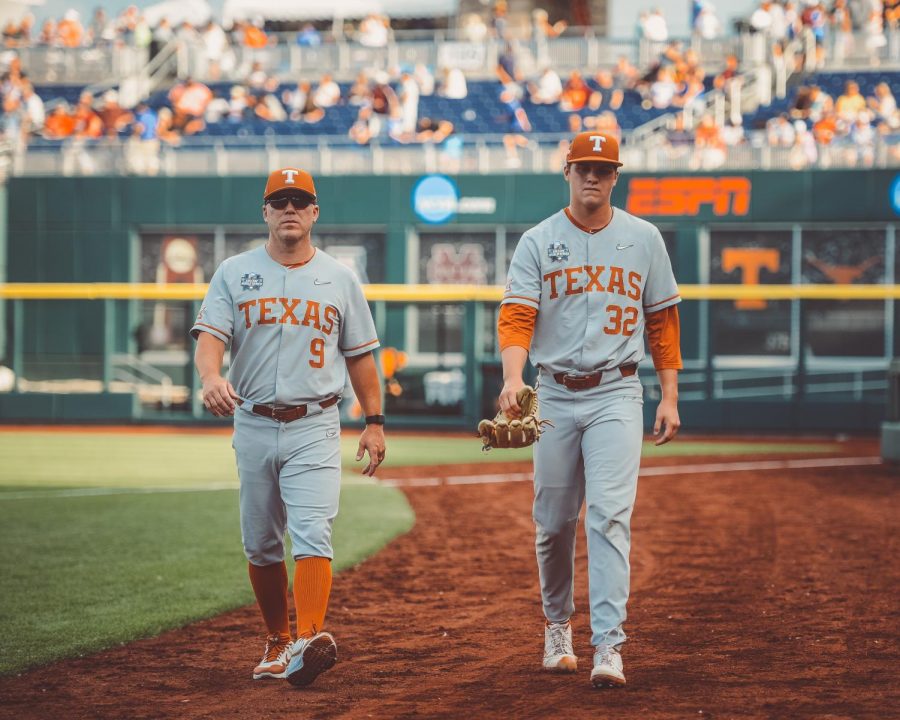 Sean Allen is no stranger to the game of baseball.

The Texas baseball assistant coach has been around the sport for decades. After his playing career finished with the University of Houston in 2001, he quickly jumped into coaching. Since then, he’s coached just about every position on the diamond. Allen’s willingness to adapt to the ever-changing game has made him one of the most talented assistants in college baseball. At no point was this more evident than in his 2021 performance as Texas’s pitching coach, when he led Texas’ pitching group to an NCAA Division I-best 2.93 ERA.

As someone who did not pitch in college, Allen said that he has always been a student of the game and constantly tries to get a better understanding of how pitchers operate.

“Even in college, I would sit in the bullpen and pick the brain of our pitching coach and try to understand everything better,” Allen said. “Pitching and hitting, they’re both rotational movements and really kind of operate the same way.”

Former Texas pitcher Ty Madden spoke highly of Allen throughout the season, crediting him with the development of the Longhorns’ pitching staff.

“I think coach Allen’s done a wonderful job with us,” Madden said on May 25. “(He’s) giving each player what they need, because I think that definitely varies.”

Instead of trying to control his players by setting goals for the season, Allen instead let the players decide their group’s aspirations as a team. The coach said he realized he had a special group when the staff collectively decided that they wanted to rank first in the nation in combined ERA.

“Right off the bat, you knew they were pretty driven because they told me, ‘Hey coach, we want to be the No.1 staff in the country,” Allen said.

Head coach David Pierce and Allen have been a part of the same coaching staff at three different schools in a relationship that has spanned over a decade. Pierce credits Allen as one of the most underrated coaching names in the NCAA since he switched from Texas’ hitting coach to pitching coach after the 2018 season.

“To be at three schools together and just continuing to trust each other and respect each other, it doesn’t get any better than that,” Pierce said during a media availability on June 13. “He’s one of the best pitching coaches in the country and people really don’t know about him yet because he just switched over.”

Allen’s decision to switch from the offensive to defensive side of the ball wasn’t the long process that many coaches who have made the change take. When presented with the opportunity to make the move, Allen trusted Pierce’s instincts, which ultimately turned out to be the right call.

“At the end of the day it really wasn’t about me or coach Pierce, it was more about our program,” Allen said. “About what he wanted to do that he felt would allow us to keep improving and get better.”

Allen believes that going forward, the Texas pitching rotation will be in good hands because of the foundation that this year’s celebrated squad left behind.

“The biggest thing that I’ve learned from our guys the last couple of years with our players is that they just put their heads down and go to work and (don’t) complicate things too much. I think the future is as bright as it’s ever been.”