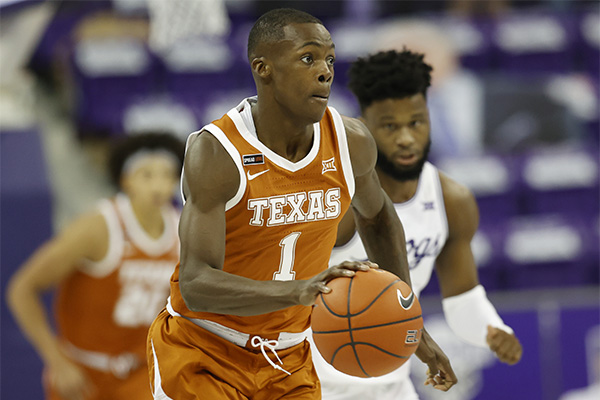 When Chris Beard took over as the new head coach of Texas basketball in April, he didn’t even have five players he could put on the court to round out a starting group.

Beard has now landed six of the top 31 transfers in the portal and likely vaulted Texas to a top-five preseason ranking after the Longhorns secured a commitment from the No.1-ranked offseason transfer, former Minnesota guard Marcus Carr.

Multiple veterans have elected to stay on the roster including Andrew Jones, Courtney Ramey and Jase Febres which rounds out the most stacked Texas roster in years.

All this talent begs the question: who will start and get minutes for this Texas squad oozing with talent? Here is a look at The Daily Texan’s starting lineup prediction:

Carr should be a more than adequate replacement at point guard for last season’s starter, Matt Coleman, who led the team in assists and was the second-leading scorer for the Big 12 Champions.

At Minnesota last year, Carr earned third-team All-Big Ten honors after averaging more points, assists, rebounds and steals than Coleman did, alongside fewer turnovers per game. The highlight of Carr’s junior season came in a loss to Nebraska when he put up 41 points.

Only time will tell as to whether or not Carr can atone for the loss of Coleman’s leadership capabilities, but the former Gopher should be a strong replacement for Coleman’s on-court production.

Texas’ depth at the forward position is such that Beard may not start three guards like Shaka Smart did last year, meaning one of last season’s starters — Ramey or Jones — could be relegated to the bench.

Ramey and Jones’ put up eerily similar numbers in 2020-21 and both bring strong leadership qualities, giving Beard a headache as to who his starting back court should be.

The case for Ramey is that he shot nearly 8% better than Jones from three, played more minutes and averaged more assists. However, the case for Jones to start is a little bit stronger.

Jones was more heavily relied upon as a scorer and three-point specialist than Ramey, and these qualities will better suit Beard’s offense. Jones led the Longhorns in scoring last year and was counted on to come up clutch in big moments, including a game-winning three against West Virginia in Morgantown.

Beard will count on Jones’ clutch three-point shooting to space out the floor for a lineup that should be more front-court heavy than last season’s.

Despite losing Kai Jones and Greg Brown to the NBA Draft, the Texas front court has more depth this year.

Now that the Longhorns have experienced forwards in Allen, Disu and Bishop at their disposal, as well as incoming freshman Tyson, Beard likely won’t go with three guards in the rotation. In his time at Texas Tech, Beard liked playing with a strong, athletic slasher at small forward like Terrence Shannon Jr. or Jarret Culver.

Allen has a strong case to fit in this mold, after averaging more than 17 points in each of his last two seasons at Utah. Standing at 6-feet-6-inches tall and weighing 198 pounds, Allen is a much bigger presence on the glass than Andrew Jones was for the Longhorns last season.

Beard will rely more on others to spread the floor and facilitate the offense while taking advantage of Allen’s size and athleticism.

With Brown, Sims and Kai Jones headed to the NBA Draft, as well as Kamaka Hepa transferring to Hawaii and Donovan Williams and Royce Hamm transferring to UNLV, Texas’ only recognized big man heading into this season when Beard took the job was Brock Cunningham.

At 6-feet-9-inches and 220 pounds, Disu is a natural fit for the Longhorns at power forward and should be an improvement over Kai Jones and Brown, both of who played at the four for Texas under Smart.

The Pflugerville native brings more of a presence on the glass than Jones, as he averaged over nine rebounds a game last year. While Disu might not possess the same athleticism, he is a much more reliable scorer than either of the now NBA prospects were, averaging 15 points per game at Vanderbilt last season.

Standing at 6-feet-9-inches, Mitchell does not bring the size that former Texas centers Mo Bamba, Jaxson Hayes, Myles Turner and Jarett Allen have brought in the past, nor the bounce that Sims had. But Mitchell brings an exciting skillset with his ability in the high pick-and-roll and his tremendous versatility and quickness for a center.

Mitchell should bring more offensive production at center for these revamped Longhorns after averaging almost 19 points at Massachusetts last season.

Mitchell shot almost 80% from the free throw line and nearly 40% from behind the arc last season, bringing a skillset at the five that Texas hasn’t had in recent years. His quick feet allow him to spread the floor, as he is very adept at rolling to the basket and catching lobs, or popping out to the three point line.