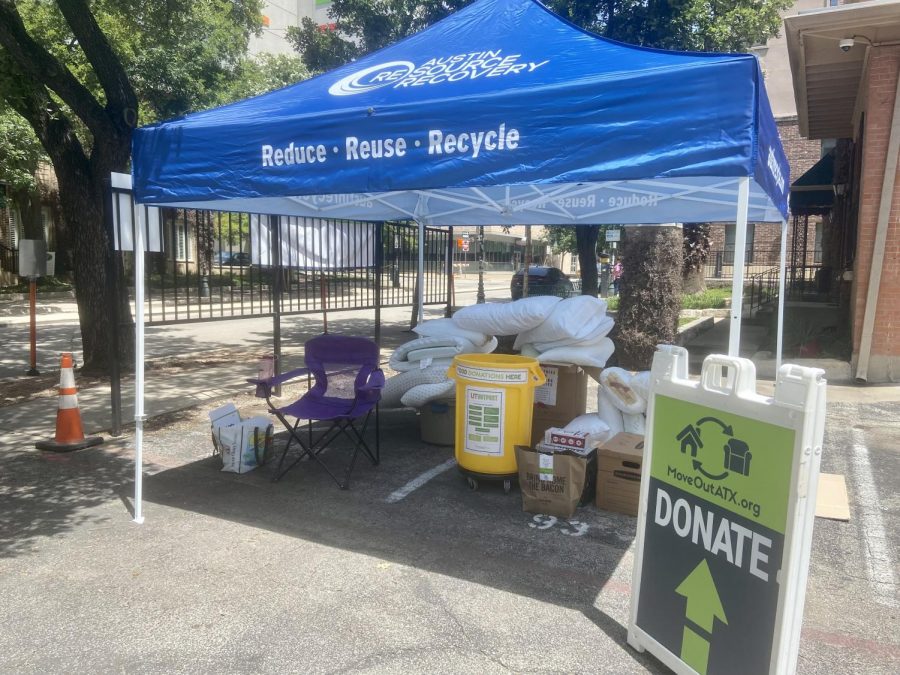 As students move out of their apartments to prepare for the upcoming school year, the organization MoveOutATX created a series of drop-off locations where unwanted items can be donated the last two weekends of July.

This year, MoveOutATX has six drop-off locations for students from July 24 to 25 and July 29 to 31 at Camino Flats, Escala Condos, Croix Condos, Cain and Abel’s, Pearl St. Co-Op and 2207 Rio Grande. Students can drop off their belongings between 12-7 pm.

MoveOutATX was created as a partnership between the City of Austin’s Resource Recovery department and the UT’s Office of Sustainability in 2018. Devia Joshi, a sustainability studies senior who is a part of the organization’s staff, said the effort is a “convenient way to donate those still usable items like furniture or appliances.”

Through Austin’s Zero Waste goal, the city hopes to reach 90% waste diversion from landfills by 2040, meaning the vast majority of waste produced by the city will be recycled or reused. MoveOutATX focuses specifically on providing a solution for students who have nowhere to store items after they move out of apartments.

“I think the biggest issue is that students may not know about it, so they just pile things up in the nearest dumpster or leave it out on the street because they don’t know that there’s a better option,” Joshi said.

Large materials left on the street can create a public safety hazard and make it difficult for EMS vehicles to travel down the roads and alleyways, said Madelyn Morgan, the conservation program coordinator at the City of Austin and a UT alum. Public health issues can also arise if items are left outdoors too long.

Morgan said she noticed the wasted materials during her time as a student. In the program’s first year, she said MoveOutATX diverted 62 tons of material, which she estimated at a $136,000 value for reuse organizations. MoveOutATX was even more successful in 2019 after they expanded the number of stations, diverting 92 tons of material with an estimated value of $200,000, Morgan said.

This year, MoveOutATX partnered with seven reuse organizations including Austin Creative Reuse, Goodwill Central Texas, Salvation Army Family Stores, the UT Outpost, the Heal Initiative, Arms of Hope and JOSCO Products. Each organization will pick up the donations and resell them, give them to community members in need or recycle them.

“I like to say that we can take pretty much anything that could be used again,” Morgan said.