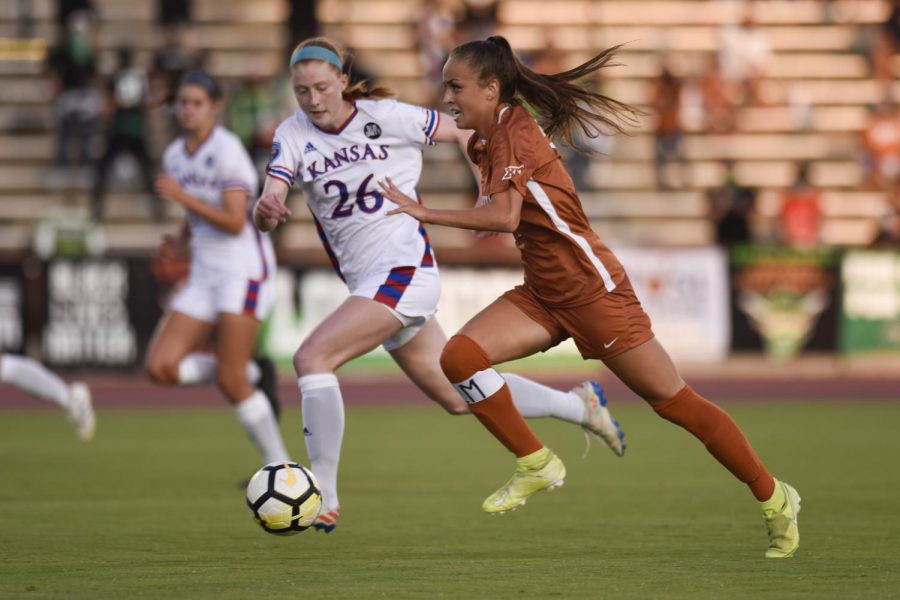 Editor’s Note: This article first appeared as part of the August 2 flipbook.

Julia Grosso became Texas soccer’s first Olympian when she was selected to represent Canada in the Tokyo Olympics. Now, the rising senior will officially leave the Games with a medal of her own.

“It’s genuinely a dream come true for me; it’s been really cool to watch this team play ever since I was 5 years old,” Grosso said.

Some of Grosso’s notable Olympic teammates include two-time bronze medalists Christine Sinclair and Desiree Scott. Grosso was not even born when Sinclair scored her first international goal back in March of 2000, but Peyton McGee, Texas soccer alumna and Grosso’s former teammate, said learning from someone with Sinclair’s experience will help the young player develop her game once she gets back to the Longhorns.

“Any international experience is fantastic. And to be able to learn from the likes of Christine Sinclair and all that stuff is unbeatable,” McGee said on July 29.

Although her experience with the Canadian Women’s National Team is invaluable, a large part of Grosso’s current success in the international realm can be attributed to her time at Texas. Grosso has learned how to command an offense with the Longhorns, leading Texas in both goals and assists during the abbreviated 2020 season.

“At the University of Texas, she’s having an opportunity to become a star … Canada’s going to need her to be a star,” Texas head coach Angela Kelly said back in 2019.

Grosso made the 2020 All-Big 12 Conference Second Team selection and had all the physical tools to compete internationally, but her experience being relied upon as an offensive focal point gives her the mental toughness to handle the added pressures of the Olympics.

“She is the most phenomenal athlete that has come through our program,” said Grosso’s former teammate Emily Strouphauer on June 25.

Although she’s received an immense amount of support from coaches and teammates throughout her career, none of her accomplishments would have been possible without her strong work ethic. Grosso said that she prides herself most on the work she puts in by herself away from organized competition.

“What matters the most is not what everyone sees you do but what you’re doing by yourself,” Grosso said. “It’s what I do by myself when no one’s watching (that) is what’s going to really help me when everyone is watching.”

Even though Grosso’s family and friends are not in Japan due to the pandemic, they are cheering her on back in North America. As the first Texas soccer player to get the chance to go to the Olympics, Strouphauer said she wants her teammate to compete hard on the pitch while also taking in the otherworldly experience of the Games and enjoying the fruits of her labor.

“I mean obviously it’s the Olympics so you have to take it seriously but also I hope she has a really good time, because I’m sure there’s so much pressure on her right now. I just want to see a smile on her face when she gets out on the field,” Strouphauer said.