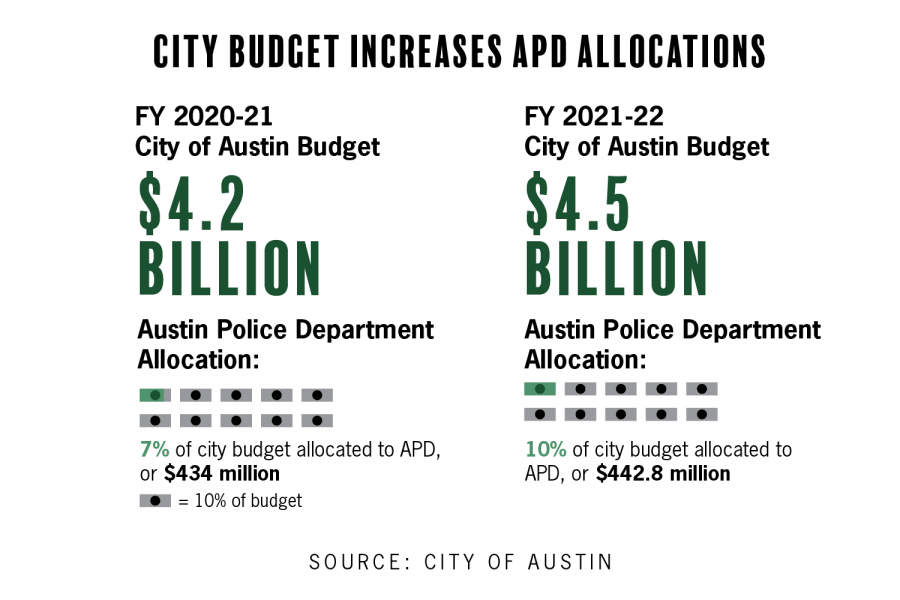 Austin residents will vote Nov.2 on a measure that could add up to $10 million to the Austin Police Department budget for 2022, creating the largest police budget in the city’s history. The measure could force cuts to city services or an increase in taxes to offset the cost, City Council member Greg Casar said.

Political action committee Save Austin Now, which also spearheaded the proposition to reinstate the homeless camping ban that passed in May, introduced the police budget increase as Proposition A. If passed, it will require Austin to have two officers per 1,000 residents, for officers to spend 35% of active duty time on community engagement and for the department to have a minimum of three cadet classes per year.

The city currently staffs about 1,600 officers. The City Council recently approved next year’s fiscal year budget, which increases staff to fund around 1,800 positions, but Proposition A calls for around 1,900.

City Council member Greg Casar said the cost of the city budget cuts would equal the budget for the Emergency Medical Services department and two-thirds that of Austin Public Health Social Services or be equal to the costs of the Housing Department and the Parks and Recreations Department.

“If there was a significant tax increase, we could keep some of these services … this is just a sense of just how big and how devastating it would be to our budget, and frankly, I think also to public safety,” Casar said in a statement.

If approved, the increase could raise APD’s budget to $560 million, a significant increase from the current budget of $290 million that the City Council reduced in August 2020 when it voted to lower funding by roughly a third in order to fund a re-imagining public safety effort. This effort involved reinvesting public safety funds into other agencies to address safety proactively.