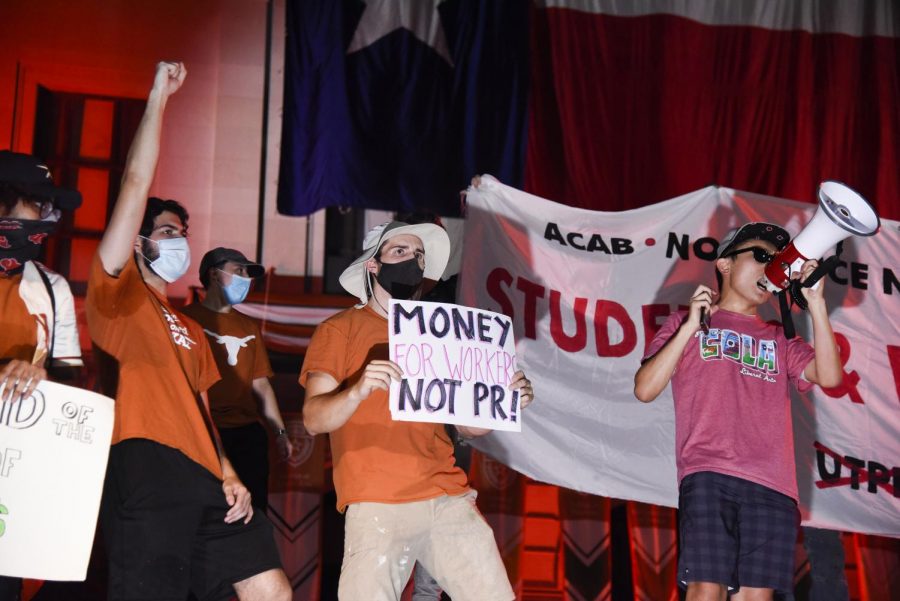 About two dozen students protested for the removal of “The Eyes of Texas” as UT’s alma mater at Tuesday night’s Gone to Texas event welcoming new students.

The protesters stood next to the Longhorn Band at the steps of the UT Tower and held a large banner that said, “Students & Workers Demand Cops Off Campus.” The protesters chanted, “Hey, hey, ho, ho, ‘The Eyes of Texas’ has got to go,” as the band played over them.

Logan Rogers, a UT student who helped organize the protest, said the group is also demanding the removal of various racist symbols on campus and to start a divestment campaign of support from campus police and military research at UT.

UT spokesperson J.B. Bird declined to comment on the protest.

Rogers said they wanted the protest to occur during Gone to Texas because it is the University’s first big event where they could reach out to incoming freshmen to get them to join the movement.

“Whenever the event ended and the freshmen were standing there, we gestured for them to come up and a lot of them did,” Rogers said.

After the event ended, the protesters marched and chanted, “No justice, no peace” and other phrases down Speedway.

“The Eyes of Texas” has been in the public spotlight over the past year after demands by various campus organizations to remove the song due to its racist history. The song was written in 1903 and originally performed at a minstrel show where white performers wore blackface.

A report released in March by “The Eyes of Texas” History Committee stated the song was “written in a racist setting,” but was “not overtly racist.” History professor Alberto Martínez released a contrary report that said the song should “not be the official song” of UT.

President Jay Hartzell said in July 2020 the song will remain the alma mater.