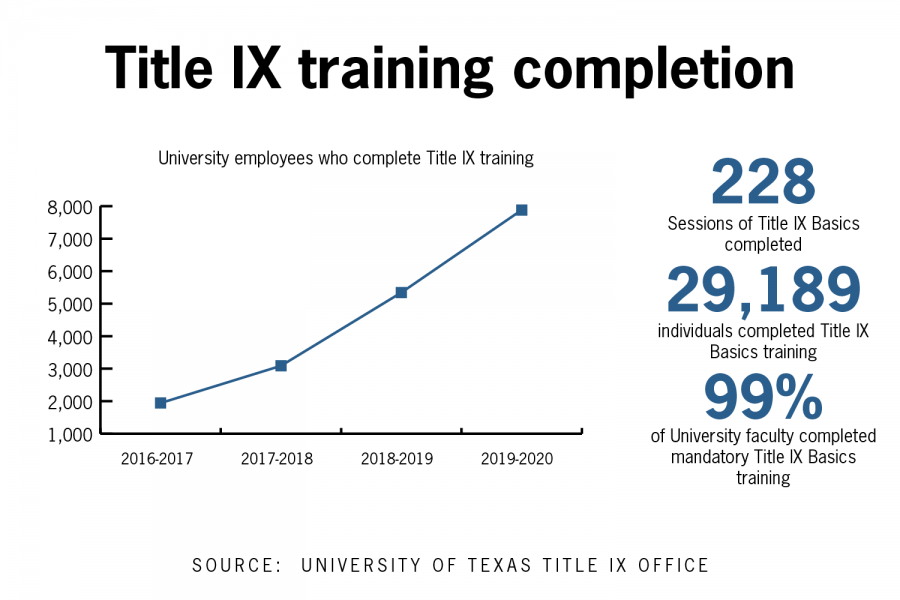 After years of UT’s Title IX faculty and staff training program seeing completion rates below 30%, the program recorded a 99% fulfillment rate after the training became mandatory in August 2020.

With completion rates in the single digits in the 2016-2017 school year, the University saw a gradual increase in numbers until the spike after training became mandatory. The University saw a 26% fulfillment rate in 2019-2020 that shot up to about 99% in the 2020-2021 school year. The program teaches University faculty about proper behavioral conduct covered by Title IX, as well as mandatory reporting and investigations.

The University mandated the training in response to Senate Bill 212, Adriana Alicea-Rodriguez, associate vice president and Title IX coordinator, said. The bill, which went into effect January 2020, states that employees will be terminated if they fail to report any knowledge of violence and sexual assault on campus.

“SB 212 had such a high penalty, with termination being the only disciplinary outcome that we could give if somebody failed to report for the statute,” Alicea-Rodriguez said. “We decided to move in the route of mandatory training to make sure that our employees were aware of their mandates on both state and federal law.”

Vanessa Sayroo, the vice president of internal communications for Not on My Campus, a student organization focused on Title IX education, said she believes creating mandatory training is effective to increase Title IX awareness on campus. Sayroo said the University needs to now focus on improving current report wait times.

“I think a lot of their efforts should be more focused on improving the system that they already have,” nursing senior Sayroo said. “A lot of people who are going through Title IX cases have to wait a long time for their cases to be processed and tried and I think that’s where their efforts should be focused, rather than adding a bunch of new things to their training.”