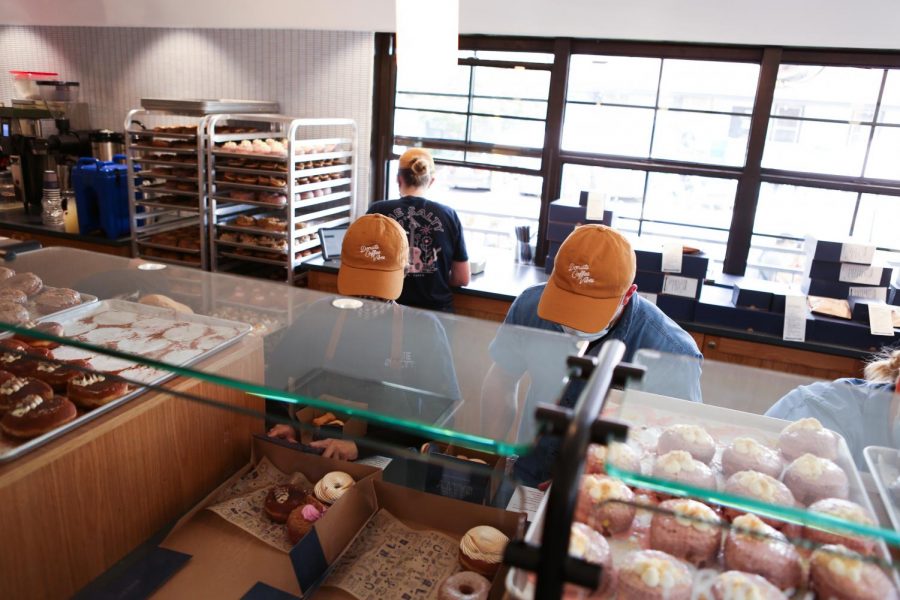 Whether they are an early morning breakfast or a late night craving, doughnuts are a UT student’s best friend. The Daily Texan reviewed three of Austin’s go-to shops to help students with all of their doughnut endeavors.

The Salty, a family-owned artisan doughnut shop originally based in Miami, made waves at its grand opening on South Congress Avenue Aug. 27. The shop garnered social media attention, block-long waits from opening to closing and herds of happy customers.

Serving both year-round and seasonal flavors, some of The Salty’s most popular craft doughnuts include “Maple + Bacon,” “Brown Butter + Salt” and “Horchata.”

Topped with a fluffy cloud of cinnamon-coated meringue, the brioche-based “Horchata” looks and tastes sweeter than the drink. Soaked in a bath of horchata, the treat favors  a softly toasted marshmallow with a very light cinnamon flavor more than a typical horchata flavor.

The Austin opening also coincided with The Salty’s debut of its all-new “Prickly Pear Margarita.” Only available in Austin, the delicacy boasts plump dough filled with an intense lime curd filling, coated in a pink prickly pear and lime glaze. Like a key lime pie wrapped in cookie crumbles and mascarpone, the pastry punches in a sharp, sweet and tangy taste, aptly reflecting Austin’s funky and zesty culture.

Founded in Oregon in 2000, Voodoo planted roots in Austin in 2015. Now, most couldn’t imagine Austin without the staple shop.

Although the doughnuts have a distinctive taste for Ezra Jacobs, a Voodoo employee and rhetoric and writing junior, they said the shop’s environment is what makes stopping in for a bite truly memorable.

“When you walk in, you feel like you’re transported in some sort of 1990s grunge alternative doughnut coffee shop.” Jacobs said. “It’s honestly like a time capsule, something that I haven’t seen much of in my lifetime.”

For first timers, Jacobs recommends trying the “Old Dirty Bastard,” a fried doughnut coated in Oreos and peanut butter, and their personal favorite, the “Guava Colada,” a guava filled doughnut topped with vanilla frosting and coconut.

Unlike Voodoo or The Salty, Gourdough’s can actually call Austin home.

Over the past decade, Gourdough’s grew from a small-time food truck to a full-service restaurant, developing a reputation as a purveyor of fried doughnuts and loaded burgers.

The original Gourdough’s food trailer, established in 2012, remains on 1st St. but now sports a modern patio with outdoor seating.

Gourdough fries its hockey-puck-sized doughnuts to perfection. Smeared in chocolate or cream cheese icing and dense enough to sink a battleship, these doughnuts should be eaten with a fork and knife and probably suit dessert more than breakfast.