Dicker the kicker and the punter: senior poised to take on multiple roles in 2021 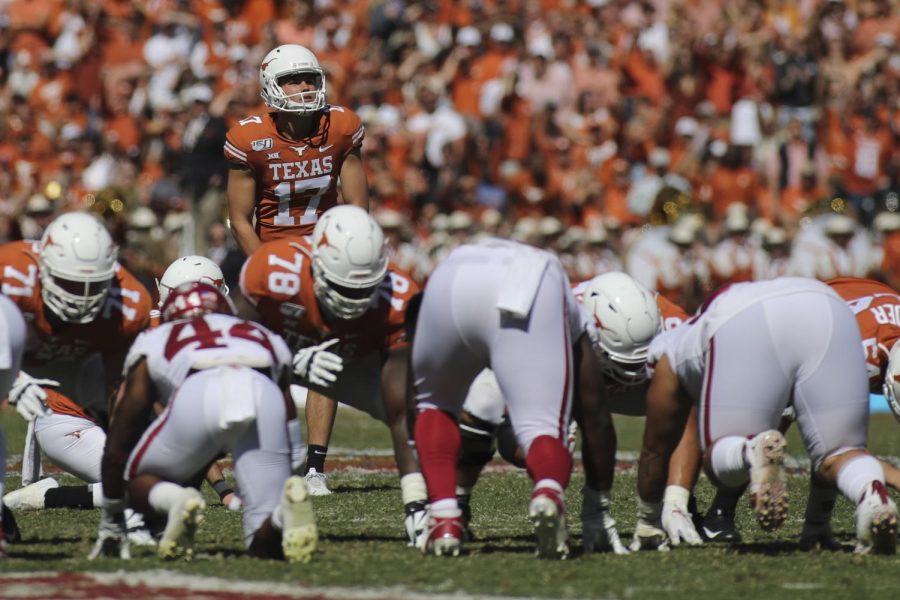 The Longhorn football faithful are used to seeing senior kicker Cameron Dicker hit game-winning field goals ever since his first game-winner as a true freshman in the 2018 Red River Rivalry game.

Last November, Dicker filled in for injured punter Ryan Bujcevski after he tore his ACL in a tackle.

New special teams coordinator Jeff Banks said during the offseason, the senior has continued to implement both punting and kicking duties with extra points, field goals and kickoffs.

“I was just super impressed with Cameron Dicker this offseason,” Banks said. “In the spring, he had a very, very good outing in those 15 practices. He’s followed it up. Spring is one thing, coming into fall camp is another.”

Dicker averaged 43.6 yards on eight punts to end last season. He followed it up by averaging 46.8 yards per punt on six punts in Texas’s spring scrimmage, the Orange-White game.

“I think I did well at the end of last season, so I was expecting to be able to come in and compete for this spot,” Dicker said. “I kind of have always been wanting to work on punting just because it’s a good tool to have for me.”

Over-kicking is a big concern, Dicker said. But the senior feels he’s done a good job of handling the issue in past seasons before Banks came to Texas, and  the new special teams coach is understanding how to strike the right balance.

Banks said Dicker is on a four-day-a-week schedule in an attempt to keep his leg fresh throughout the season.

“We’re not worried about how many teams he’s on and how many things he’s doing, but we certainly are going to limit the amount of reps, day in and day out,” Banks said. “We don’t wear them out and then all of a sudden we get to the third, fourth, fifth, sixth game and he’s not kicking the ball off as deep, and his leg starts to get a little bit weary.”

Competing for the punting job wasn’t the only thing Dicker’s done in the offseason. The senior said he had shoulder surgery in January that limited him until the first day of spring ball.

Then, after new name, image and likeness rules, he said he did a couple commercials with a local roofing company.

But a fun potential deal with a burger place or punting responsibilities aside, Dicker is a kicker, first and foremost.

The senior has collected quite a career, scoring the sixth-most points in Texas history, and his biggest strength as a kicker might be his reliability in the often-overlooked extra-point kicking arena.

He’s also the sixth-most reliable Longhorn field goal kicker in terms of field goal percentage. The next steps he can take as a kicker are improving accuracy in the 40-49 yard range, where he missed three last year, and hitting the occasional 50-plus yard field goal, which he showed he certainly has the leg for with a 57-yard and 58-yard make.

Making those improvements could cement his place among the great Texas kickers of the past, including Justin Tucker and Phil Dawson.

“That’s in the back of my mind,” Dicker said.