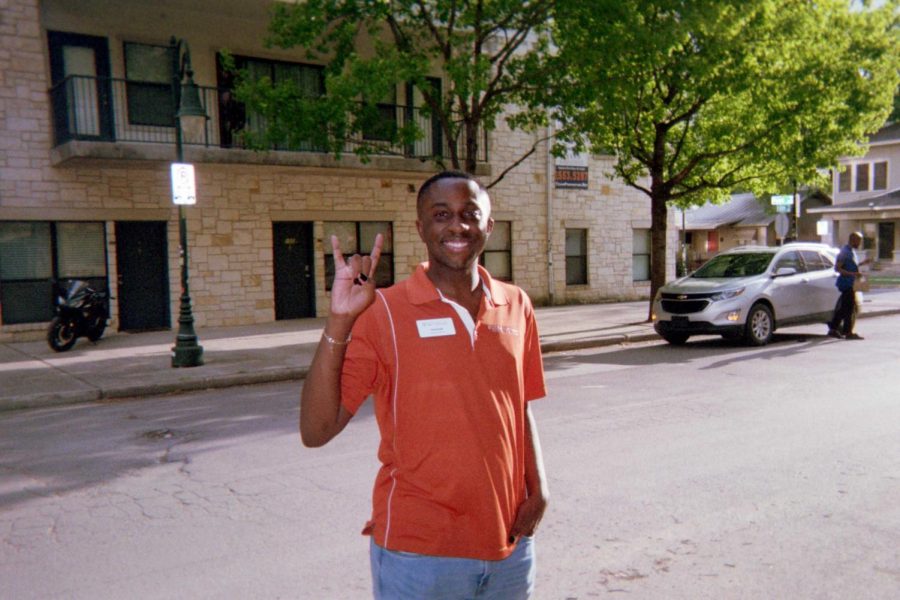 The University removed “The Eyes of Texas” lyrics from the Admissions Welcome Center in late July, ending the Texas Tour Guides’ nearly three-month strike to have the song erased from the building.

The guides went on strike May 1 after sending a formal statement of demands to University administration April 19. The University removed the lyrics after the guides pressed UT in June about their requests, said Miguel Wasielewski , according to previous reporting by the Texan.

Wasielewski, executive director of admissions at the Office of Admissions, said the title of the alma mater, “The Eyes of Texas,” will instead be on a list of traditions, which UT will post on a wall in the center.

Tour guide Jeremiah Baldwin, a government, rhetoric and writing and African and African Diaspora studies junior, said he thinks listing the song as a tradition rather than having the lyrics sets a different tone.

“I think that in that instance, it’s just as simple as it being a piece of the University and not glorifying the song,” Baldwin said. “I think with the lyrics being on display, that sets a different tone, as opposed to simply just stating in ‘The Eyes of Texas’ is historically a tradition here at UT-Austin.”

Baldwin said removing “The Eyes of Texas” from the Admissions Welcome Center will make the University a more welcoming place for Black students.

“I feel as though ‘The Eyes of Texas’ is something that I don’t want to have to experience or have to see in the Welcome Center,” Baldwin said. “I want students coming into the Welcome Center, especially Black students, not having to see that and think about the fact that not too long ago, people who look like them weren’t able to attend this University.”

Tour guide Avery Thompson said she is proud of what the guides were able to accomplish.

“All of these changes that have happened in large part because of what we have done and because of the strike,” chemistry senior Thompson said. “It seems like they still respect us and care about us and understand how important our position is.”

Over the past year, the UT community has called on the University multiple times to remove “The Eyes of Texas” from University programming in the form of petitions, reports and meetings. While UT has removed the song from the Admissions Welcome Center, UT will still play the song at sporting events after after the University announced in April that the Longhorn Band will be required to play the alma mater. However, a currently unnamed band will be assembled in fall 2022 who will not play the alma mater or the fight song. It is unclear whether this band will play at University events such as football games.

The road to removing the lyrics was not easy. In early spring, the University hired Brad Deutser as a consultant to revamp the image of “The Eyes of Texas.” Many guides said that Deutser made them feel unheard and uncomfortable when they met with him to discuss the song.

Deutser was also a part of the “The Eyes of Texas” committee that released a report in March that concluded the alma mater is “not overtly racist” that there was no photographic evidence of the song being used in blackface and no evidence that the phrase “the eyes of Texas are upon you” came from Confederate general Robert E. Lee. Alberto Martínez, a UT history professor, later disrupted the committee’s findings when he released two reports concluding that the song was inspired by Lee and was written at the height of minstrel show popularity at the University.

Wasielewski said he was not part of the meetings the guides had with Deutser but said his meetings with them were productive. After meeting with Wasielewski in the summer, the guides felt their requests were better received, Baldwin said.

“Our tour guides have a good eye for exploring that space (and) have something to contribute to this dialogue,” Wasielewski said. “We need to be able to listen to what their ideas and thoughts are, and then be able to incorporate those.”

Wasielewski said any guides that were on strike did not have any barriers to becoming a tour guide again this fall if they chose to do so.

Along with removing the song’s lyrics from the Admissions Welcome Center, the guides achieved the higher pay they also went on strike for. Thompson said the guide’s pay increased from $9 per hour to $12 per hour. The Admissions Center also started compensating the Texas Student Recruiters, who previously engaged in conversations with potential students as volunteers.

Baldwin said increasing the pay for the guides better reflects the work the guides do for the University.

“I think it will diversify our applicant pool and make a more welcoming experience for students going on tours that might be of different marginalized communities that oftentimes aren’t represented,” Baldwin said.