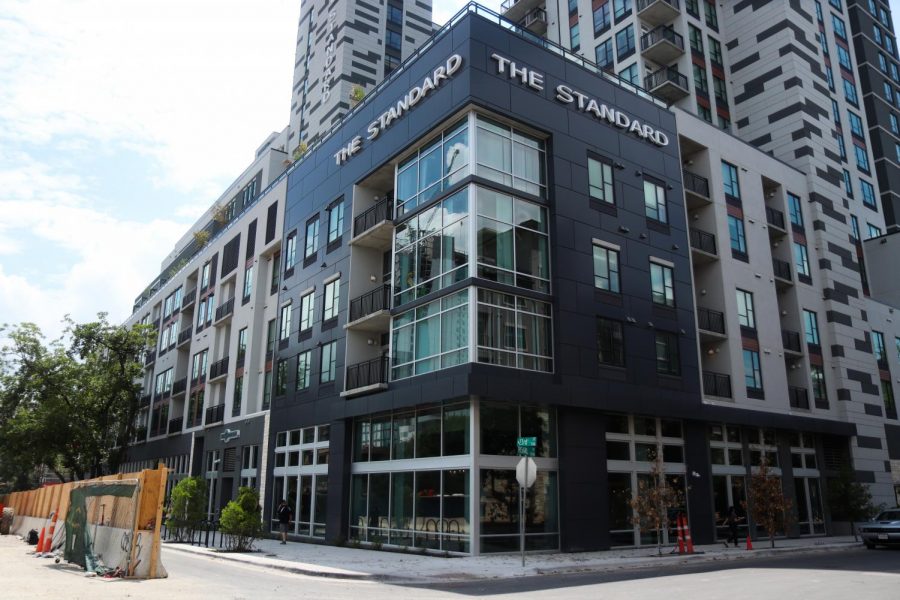 Students moving into The Standard at Austin, a newly constructed apartment complex, are dealing with unfurnished apartments, a fake maintenance worker, broken dishwashers and an unresponsive management team.

“It’s been a disaster,” said Chloe Franchville, a psychology senior and resident at The Standard. “It looks pretty from the outside, and I have a good view, but this is not what I was promised.”

Some of The Standard tenants said they moved into partially unfurnished apartments and that certain systems, such as the trash shoot and air conditioning units, are not operational. Additionally, The Standard informed residents in an email sent Aug. 13 that a man named Zachary had been falsely posing as a maintenance worker for several days.

Zachary worked for Sundown Security, a third-party patrol company at a construction site across the street. Zachary joined a resident GroupMe under the name of “minion” and told residents he was an employee at The Standard.

Plan II senior Abby, who’s name is changed to protect her identity because she is trying to have her rent prorated due to the issues she has faced, said he entered her unit two times to “solve” maintenance issues before management noticed his presence. Abby initially reached out to Zachary to fix issues with her toilet. Abby said Zachary wanted to temporarily flood the bathroom. After Abby refused, Zachary took the top of the toilet cover and left.

The Standard asked tenants to cease mail delivery for a week and a half after move-in because the complex was still considered a “construction site,” The Standard front desk employees said. Once mail could be delivered, Zachary brought several packages to the resident’s rooms, including Abby’s.

“The thing that’s alarming is nobody on staff noticed him here for several days,” Franchville said. “He was just walking around, talking to kids that live here.”

The Austin Police Department gave Zachary a non-trespass notice, and Sundown Security terminated him, according to the email The Standard sent to residents Aug.13. The Standard encouraged residents to not engage with him via social media or any other platforms.

Abby said she has other concerns about the complex as well. She said the apartment layout she originally signed a lease for is different from the one she has now, and some of her roommates are paying substantially different prices for rooms in the unit that are roughly the same size. Abby also said her air conditioning unit was broken for the first four days, some bathroom utilities did not work and furniture was not in the unit upon move-in.

“I’m paying an absurd amount. Everything should be in tip-top shape for this price. … I’m fine living somewhere with problems, but if I’m paying as much as I’m paying, I expect it to be a certain quality, and if not I expect them to give me my money back,” Abby said.

Abby said The Standard has not offered any compensation to renters dealing with these issues.

Franchville said she encountered similar issues with her unit upon move-in. The unit lacked a TV stand and kitchen barstool chairs, and also had a broken washer, dryer, garbage disposal and dishwasher.

“Most of the employees are college-aged and don’t really know how to respond to our issues,” Franchville said. “We don’t really see a lot of authority figures unless it’s security guards, so it’s hard to even find someone to talk to.”

The Standard notified residents via email that it would fine them $25 per bag of trash placed in hallways after Aug. 21, but Abby said the issue with trash chutes is ongoing.

Franchville said that the trash problem has attracted possums to common areas and stairwells. Although neither Franchville or Abby have seen the rodents, they said tenants in the apartment complex GroupMe have sent images of rodents in halls and units.

The Standard did not respond to multiple requests by The Daily Texan to comment on these issues.

“(The Standard) should have already contacted everyone and been like, ‘We’re sorry the building is literally not built and there are all of these problems, we will take money off your rent or give you free parking.’” Abby said. “I am going to email them and ask for money off my rent because this is not acceptable, and they know there are issues.”