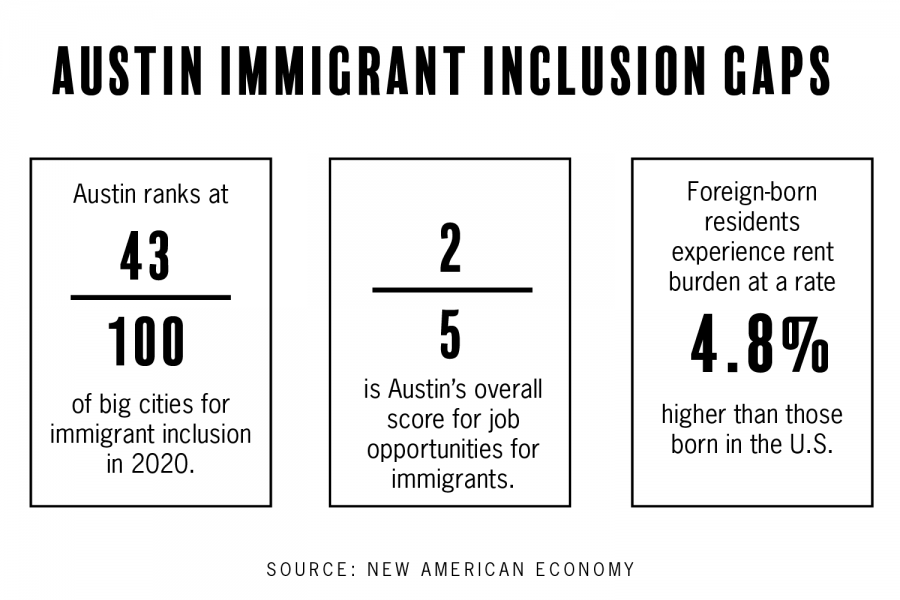 Researchers found that Austin’s annual wages were $10,000 lower than the national average, Wasem said, and fall under Texas’ average pay.

“When you consider what a wealthy city Austin is and the construction boom the city is in, that is pretty troubling,” Wasem said. “And on top of that, we found a gap between foreign-born wages and native-born wages working the same type of job.”

Ana Perez, a researcher on the project, said because of discrimination in larger companies, immigrants are led to take on more entrepreneurial roles than natural-born citizens.

“If you’re an immigrant, you make less money,” said Perez, a former graduate student at the Lyndon B. Johnson School of Public Affairs. “That could influence the entrepreneur rate because a lot of times, immigrants will have a higher rate of entrepreneurship since they get paid less working as high-skilled laborers in bigger companies.”

Researchers also found that Austin had some of the lowest rates in naturalization.

“When you see how sophisticated Austin is and how our immigrants are very diverse … we should have a higher naturalization rate,” Wasem said. “That was one of the things we were quite concerned about in our recommendations to the city.”

Wasem said the researchers provided the city with a list of recommendations to improve immigrant inclusion. The recommendations included setting up an office of immigrant affairs and actively working on civic engagement with immigrants.

“Whether or not you’re an immigrant, housing affordability affects everyone,” Perez said. “We recommended to the city to work specifically within immigrant communities to make sure that those groups of people would become eligible for the programs that benefit everyone.”