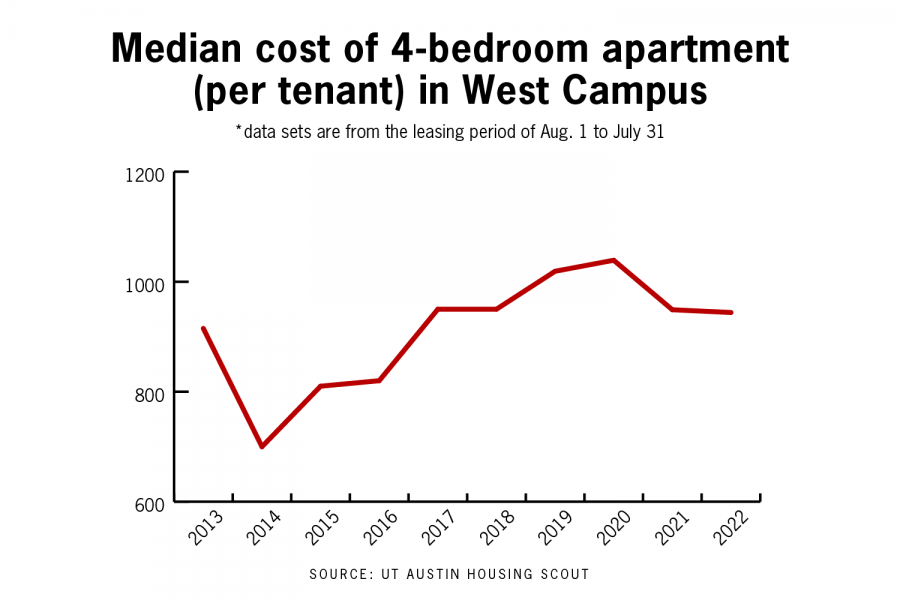 Editor’s Note: This article first appeared as part of the August 31 flipbook.

Apartment buildings, condominiums and co-ops have taken up all of the available land around UT for more than a decade, an Austin-based student housing broker said.

As apartments continue to increase prices without losing demand and replace old buildings with luxury housing, he said the state of student housing is becoming a crisis.

“All the land has been built out around campus, and now students are mostly restricted to an area that is not sustainable,” said Blaine England, a housing broker who has been working for over 20 years in Austin.

A 2020 analysis by housing advocacy group HousingWorks Austin said 48% of renters in District 9, where West Campus is located, are “rent-burdened,” where a tenant spends more than 30% of their monthly income on housing. The district also has the highest average rent of all 10 districts at $1,709 a month, though this area includes more than West Campus.

Smith, a mechanical engineering senior, said he feels many apartments are able to get away with charging high rates for lesser quality apartments because of their proximity to campus.

An analysis by Zillow, an online real estate marketplace, recently found Austin may be the most expensive place to live in the U.S. outside of California by the end of the year if current trends continue.

Just this semester, several new luxury student living complexes have opened, including The Standard, Villas on Rio and Torre. The average two-bedroom apartment rent at Villas on Rio is $1,400.

For reference, the median family income of UT students in 2019 was $10,375 per month, according to a UT Report to the Governor.

“UT has historically never provided enough University housing for students,” Way said. “It’s a big problem … it certainly makes UT less competitive in terms of its ability to attract faculty and students as they cannot afford to live in the area.”

Way said that while luxury apartments being built do not necessarily drive up the cost of surrounding real estate, a big issue is these complexes taking the place of affordable options that are knocked down to create room.

“Rising rents can be affected by the fact that luxury housing being built shows there is an appetite for people paying higher rents,” Way said. “There’s also a loss of affordable housing that has historically served students in places like East Riverside where you have affordable apartments that are being torn down to pave way for luxury ones.”

The same HousingWorks Austin analysis found median rents in Riverside to be around $1,280 a month per person, with an average family having a median annual income of $3,860 per month.  Average rent was $1,172 per month in 2015. Now, around 50% of residents in the area are rent-burdened.

Many students have lived in Riverside to avoid higher prices, trading affordability for accessibility as it is a 20 to 30 minute commute to campus every day.

But Riverside is not immune to the housing market growth, and the city of Austin has also failed to address issues with student housing.

An ongoing study by the Austin Mobility Bond Project of Austin gentrification rates shows the Riverside area is one of the “most vulnerable” to housing instability on the study’s rating scale, given the housing market has accelerating rates of growth that are unsustainable for the average demographic in the area.

Austin City Council also voted to rezone Riverside for mixed-use development in 2019, which caused students to protest in fear of losing their housing to higher rent prices.

In 2004, the city passed an initiative called the University Neighborhood Overlay Plan (UNO) which increased the zoning density of the West Campus neighborhood. England, a student apartment housing developer at the time, said the nature of UT student housing has changed greatly since this measure.

Height restrictions range between 40 feet and 220 feet depending on the location.

But England said this is complicated by the Capitol View Corridors, a measure that restricts building heights to 200 feet in different areas of the city to prevent the view of the Texas Capitol being blocked. Given the proximity of West Campus to the Capitol, the city does not often approve buildings tall enough to qualify for UNO affordable housing.

“The campus has really boxed itself in, meaning complexes can charge what they want because students want to be near campus,” England said.

Nora Linares-Moeller, the executive director of HousingWorks Austin, said students are not seen as being rent-burdened, which creates challenges for them to find affordable housing.

“One of the reasons students have been forgotten, is that you tend to think of a student having a scholarship, or their parents paying for their housing, or they’re on campus,” Moeller said. “But this year, the increases in property and housing have been astronomical, and yet household incomes haven’t grown fast and neither have student incomes.”