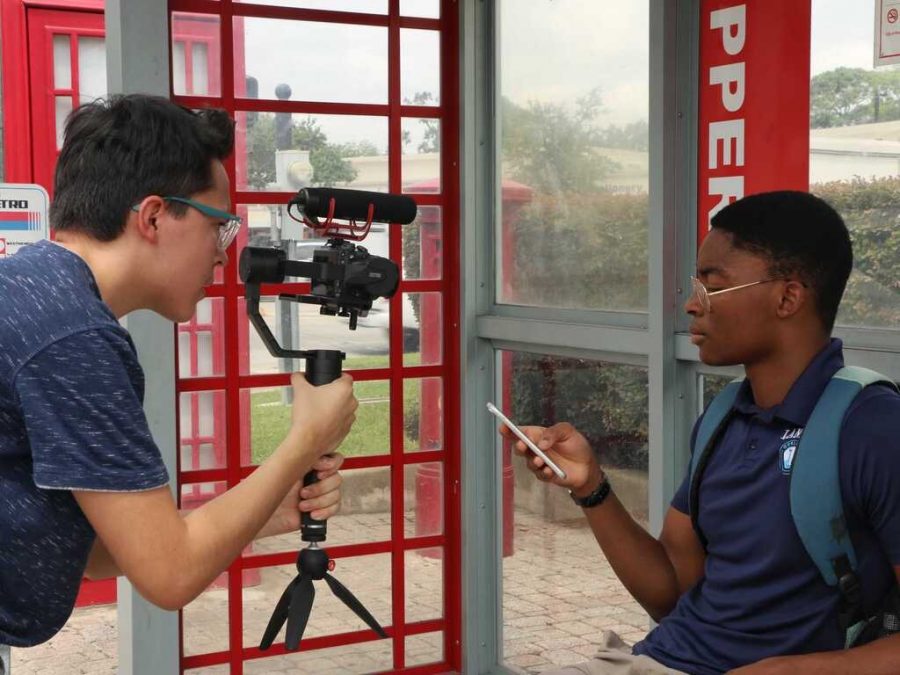 Editor’s Note: This article first appeared in the August 31 flipbook.

Every morning before school, when his parents couldn’t drive him, Marlon Rubio Smith hopped on the Houston Metro bus. What others viewed as a tedious commute, Smith viewed as a way to appreciate life.

“To me, that little short trip is beautiful,” Smith said.

In June 2021, the radio-television-film sophomore turned his fascination with public transport into a film called “Beauties of the Morning.” The silent feature documents two high schoolers riding the Metro to school.

After COVID-19 turned all of his classes virtual, Smith said he began reminiscing on his mornings in high school where getting to school required more than opening a laptop.

“Many of my ex-classmates … don’t really seem to miss (high school),” Smith said. “It’s not that I miss it like, ‘Oh, I wish I could be there right now,’ … but I actually miss some of the experiences in going to school on the Metro.” Smith’s friend Simon Chardey, who portrayed the male student in the film, said acting in it impacted his view on his daily routine.

“I’ve been trying to find happiness (in) tiny little things and not so much focusing on the biggest achievements, but small things I do every day, like how those could be fulfilling,” Chardey said.

Although a decade has  passed since he has acted in anything, Chardey said he enjoyed acting more than he expected.

“There was this one part where (Smith) wanted me to dance across the street, and it was a busy, popular street so there were so many cars coming by,” Chardey said. “Right after we filmed, I got text messages from three people that I knew that they saw us at the intersection, and I thought that was hilarious.”

Smith’s girlfriend Samantha Sangerman, a Houston Community College freshman, played the other character, a female student. She said she spent her favorite moments filming inside a private Metro bus.

“We had permission to have our own Metro,” Sangerman said. “The first day (filming) was the scene inside the Metro, so it was an opportunity to just be there, taking our time and doing what we have to do.”

Annalise Vanderwater, a Sam Houston State University sophomore, took behind-the-scenes photos and videos for the film. She said she loved participating in a creative environment after months without the opportunity to do so.

“During COVID and quarantine it was really hard to have a creative outlet, and so it brought me back to the real world and how you can … create something so easily,” Vanderwater said.

Smith, who wrote, produced and directed the film, said he is also editing it himself to bring his vision to life. Currently, Smith hopes to edit his film by November in time to submit it to Houston film festivals.

As he edits, Smith said he looks back fondly on his time in high school. Creating the film helps him appreciate even the bad days.

“Even with the bad stuff, like missing the bus, once you recall those experiences, they’re nice,” Smith said. “That’s what makes high school sort of special. At the moment it’s like, ‘Oh, why does it happen to me?’ … And right now it’s a nice memory that I have.”