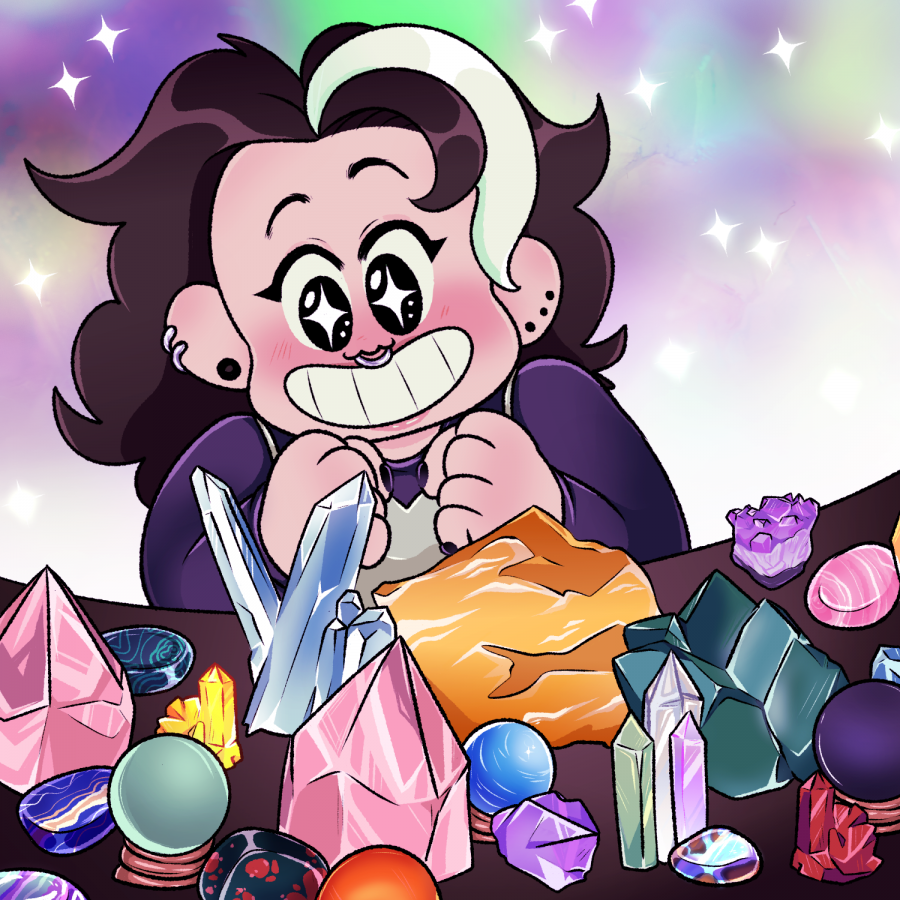 When Fatima Vega lost her uncle, she said she felt like she lost herself. Only eight years old, too young to understand the gravity of the situation, her mother placed a transparent quartz crystal in her hands. Pressing it against her fingers, Vega took the first step into her spiritual journey.

“When I was growing up, I really didn’t understand it,” linguistics freshman Vega said. “But it helped me feel more connected to the Earth itself (and) feel more balanced out rather than wondering what’s next for me.”

Though the use of crystals for healing practices dates as far back as 4000 BCE, misconceptions lead many to believe they are merely a passing trend. Rising in popularity through social media platforms such as TikTok, many have found new, personal meanings for crystals.

Moving between Mexico City, Barcelona and Dallas in a family of healers, Vega grew up around Santeria, using herbs and healing rituals. Having years of practice with crystals and knowing the meaning behind each one, Vega said seeing people use her spirituality as an aesthetic makes her frustrated and worried about losing the true meaning and value of her family’s traditions.

“Different cultures have different meanings of what spirituality is, but this is mine,” Vega said. “I grew up with it. It really sucks, to see that it’s being overly used and there’s a bunch of misconceptions of what it is, predominantly on TikTok.”

Biology sophomore Sam Aguilar began manifesting and using crystals shortly before entering college. Though they grew up in a Christian household, Aguilar said they felt more connected to using crystals and learning more about themself in the process.

“For me it’s a routine, so it gets me into a better mindset and mood,” Aguilar said. “I use (crystals) for spiritual, emotional and mental healing. I like manifestations and setting my own intentions to bring good energies and friends and overall optimistic feelings.”

Aguilar said they saw crystals growing in popularity on social media, especially over quarantine. After researching the many cultural variations and learning the meanings behind the crystals, Aguilar suggested taking the time to learn the background behind specific spiritual practices instead of simply following trends on social media.

“I definitely think it’s cool that platforms like TikTok and Instagram are spreading awareness on crystals and genuinely helping people,” Vega said. “But it’s also disrespectful whenever they don’t take the time to research and respect the art form of using crystals and relating that to spirituality.”

Michael Elk, store manager at Nature’s Treasure, a crystal shop in Austin, said he sees the interest in crystals evolving day by day. His customers range from spiritualists to healers to rock collectors and more.

Students share thoughts on crystals trending in social media, rising popularity of spirituality“We have definitely observed a huge influx of new visitors that ask about specific stones that have trended on social media, especially moldavite, carnelian and aventurine,” Elk said. “However, they often feel connected with other stones we carry and end up leaving with a deeper appreciation for the crystal kingdom as a whole.”