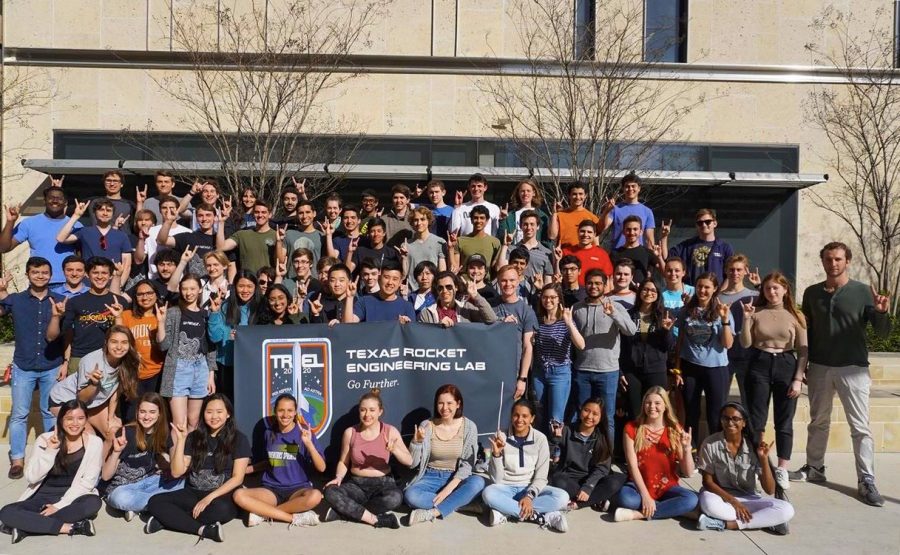 Editor’s Note: This article first appeared as part of the September 14 flipbook.

UT engineering students could become the first collegiate team in the nation to launch a liquid-propelled rocket into space.

In 2019, the team started in the Base 11 competition hoping to achieve this dream. Although the competition is now unofficially canceled, the team of over 200 students continues to work independently to create the rocket they named Halcyon and launch it from scratch, said Sandy Barker, director of Texas Rocket Engineering Lab.

The team does not have a set date for the rocket’s completion, but they are ordering the last component for the engine and plan to start assembling it soon, chief engineer Lauren Rodriguez said. The earliest they could launch the rocket is in a year, Barker said.

Evan Silva, the structures principal engineer for the group, said creating the rocket is a long process of design, review and testing.

“It’s just an amazing feeling that something that you pulled out of your head … did exactly what it was supposed to do,” Silva, an aerospace engineering junior, said. “That’s one of the most satisfying feelings to have as an engineer.”

Barker said the team is designing the rocket from scratch, which is harder to create than a solid rocket engine.

“You can buy a solid rocket engine from different companies, and they’ll typically mix all the chemicals together for you and put it into the case from where it will burn,” Barker said. “So one of the big things is all the timing that’s involved.”

Rodriguez said the team plans to test the durability of the rocket through various simulations, including a hot fire test where the team’s engine is fired with gas to ensure it can handle launch conditions. Rodriguez said the team will fill the engine with water first to test the amount of pressure it can withhold before performing a hot-fire test.

“You fill it with water and pressurize it higher and higher than you think it’ll ever have to handle and if it does (handle), you’re good to try gas,” said Rodriguez, an aerospace engineering senior. “Starting with water is a lot less dangerous because if you had a failure with your engine filled with gas it’s going to explode pretty catastrophically.”

Once the rocket is built, the team hopes to collaborate with other schools to help them build their own rockets. Barker said the team is working on a partnership with Huston-Tillotson University.

“There are other schools that dropped out of the competition that we weren’t really communicating with, and now we’re free to collaborate,” Barker said. “What we (would) really like to do is form a national university rocket consortium.”

The Texas Rocket Engineering Lab formed in 2019 and is now collaborating with aerospace engineering companies such as Firefly Aerospace and Emerson to help fund the project.

Overall, Barker said the team is excited to see what the future holds.

“Our philosophy is let’s design it, build it and test it,” Barker said. “We’re going to fail over and over and we’re going to learn from every single failure. That’s how rocket science works.”