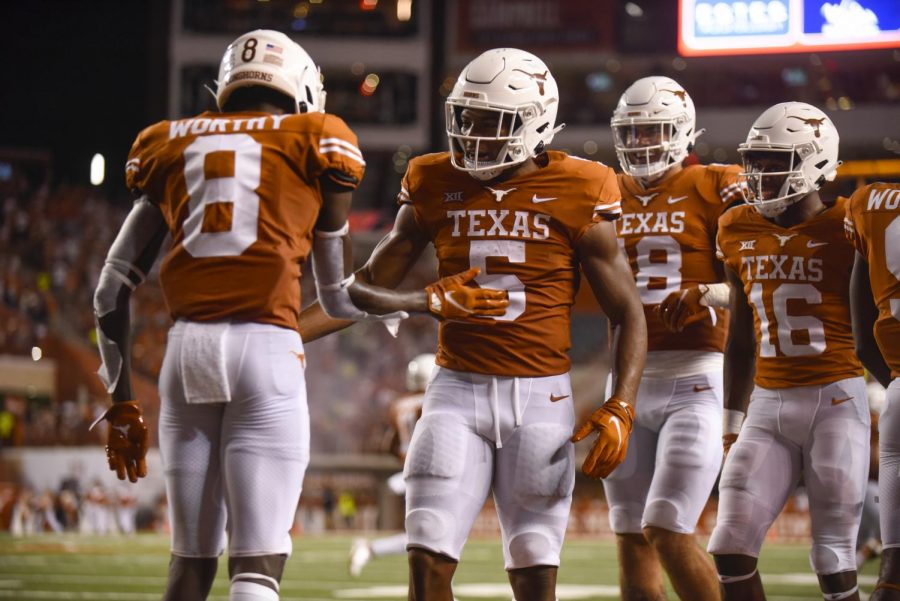 Nathan Han: Texas is about to start what might be their last Big 12 regular season against Texas Tech this Saturday. The 58–0 win over Rice might not have shown us much about this football team, but what’s your general impression of where this team is at before conference play?

Matthew Boncosky: While you’re right to say that we shouldn’t look into a win over Rice too much, I do think it’s a positive sign that Texas performed as well as it did coming off a humiliating loss. After all, this was the same Rice team that was up on Arkansas at halftime of Week 1.

Coming home after the Arkansas loss and blowing the doors off the Owls while shutting them out shows that the team is currently in a good place mentally. Now, all that can change with a poor showing in conference play, so there’s still a lot left to be determined.

The Longhorns still need some work, and this isn’t necessarily the same subpar Texas Tech team of years past coming into town. What strengths do the Red Raiders have this year that they haven’t in previous years?

NH: The Red Raiders really flashed their downfield passing attack in a 54–21 win over Florida International last Saturday. Everybody from head coach Steve Sarkisian to starting safety B.J. Foster mentioned Tech wideout Erik Ezukanma as somebody to watch out for.

A big, physical receiver, standing at 6 feet and 3 inches, Ezukanma burned Texas with seven catches for 91 yards and a touchdown last year. New starting quarterback Tyler Shough finally looked more comfortable in Week 3, and that connection could come back to haunt the Horns.

Texas hasn’t really faced a passing attack the caliber of Texas Tech yet. How confident are you in the secondary and the pass rush in limiting Shough and company?

MB: You’re right, the Texas Tech passing game will be the biggest test yet for Foster and the rest of the Texas secondary. If you look at the Arkansas game, the Longhorns held quarterback KJ Jefferson to under 200 yards passing, but he was able to complete multiple chunk passes and completed 14 of his 19 throws while also being more of a threat on the ground.

The Red Raiders will air it out much more than Texas has seen so far this season. That means the pass rush will have more opportunities to rush the quarterback, and making life uncomfortable for Shough will be key for the defense’s success as a whole. If he has a clean pocket to work from all afternoon, eventually Shough will start finding open receivers no matter how well the secondary plays. Saturday will be a huge opportunity for Texas fans to see if the adjustments made through the first quarter of the season have been enough.

Texas Tech’s defense has excelled at stopping the run so far this season. With that being the foundation of the Texas offense, do you think the offensive line will have success at opening up running lanes in the Red Raiders’ front seven?

NH: Progress in run blocking against Rice on Saturday might’ve been the most encouraging sign for the Longhorns. But the Owls defensive line is not anywhere near Texas Tech’s front seven.

I’d expect Texas to make some gains on the ground but not the 60-plus yard touchdowns that the team earned against Rice. Where the game will be won or lost when it comes to the Texas offense, though, is through the air by way of Casey Thompson’s arm.

Thompson still hasn’t managed to connect on a deep pass this season. What do you think is holding the Longhorn offense back from completing those explosive downfield throws, and could that change next Saturday?

MB: Sarkisian said after the Arkansas game that nothing about the Texas passing game fears opponents at the moment. I think we saw a little bit of improvement against Rice, but as you said, the Longhorns have yet to complete a deep-chunk play.

For me, it comes down to scheming and play design. We saw Sarkisian call plays against Rice with more pre-snap motion that actually involved getting the ball to the motion man. Building off that and installing some more creative route patterns should help the passing game going forward.

If that passing attack does get rolling, I think Texas should have little trouble winning this game in Austin. I like Texas to win by a touchdown and a field goal: 31–21