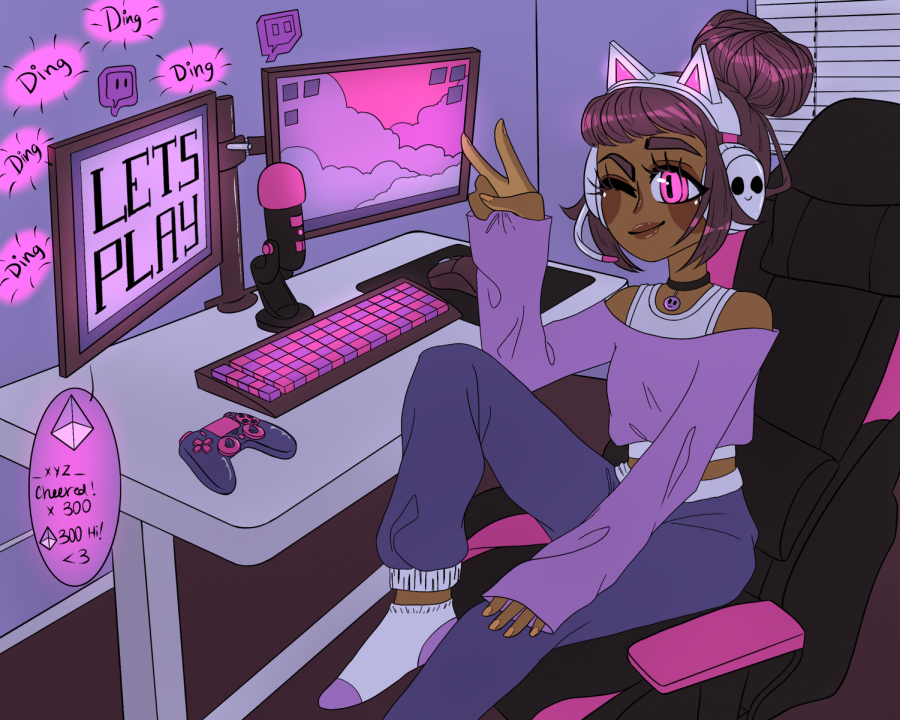 Last December, Taesung Tao turned on his webcam and began his new hobby as a daily Twitch streamer. Now only 10 months later, he produces content for a fan base of over 139,000 followers, making it his full-time job.

Twitch, a popular live streaming platform, stands as the leading outlet for creators to share game-related content. The platform facilitates growth of online communities — especially since the COVID-19 lockdown. For many UT students, the platform grants them the opportunity to generate an online presence and, in some cases, earn a steady income.

“I think people really enjoy the concept of being able to type a message in chat and then a streamer immediately responding,” Tao said. “It’s part of what also makes me enjoy streaming.”

Tao, an arts and entertainment technologies freshman, said as a member of the LGBTQIA+ community, the platform allows him to spread awareness on a wider scale.

“I did not talk openly about being a trans man until very recently … I came out a few days ago,” Tao said. “That definitely sparked a large (reaction) online not only in my community but from people who didn’t know who I was, because I’ve gotten a lot of trans discourse in my comments.”

Despite some backlash, Tao said sharing his identity with viewers felt daunting, but ultimately proved rewarding.

“I would not have been as comfortable as I am now talking about the things that concern me — both in the LGBT community (and) my life — if I didn’t have a platform full of people who are just wanting to listen to me,” Tao said.

Like Tao, many Twitch streamers have transformed their experience with the platform into paying jobs. Computer science senior Edward Chamblee said Twitch allowed him to mold his passion for video games and performance into a gig as a paid game commentator.

“I dug up my old MacBook from 2011…and the oldest video I could find on there was of me saying how in the future I wanted to have a video game talk show,” Chamblee said.

Chamblee said making connections through streaming earned him his dream position commentating for the Brawl Stars World Finals in Romania — a gamer’s paradise.

“My first day streaming, I got up to seven viewers, and I was freaking out. I was like, ‘I can’t believe seven people are watching. Seven living human beings consciously made that decision,’” Chamblee said. “From there, you have to establish consistency…and then you’re able to create a community.”

Emily Daley, a radio-television-film junior, said she met many of her closest friends on Twitch. Currently, she works as a producer for Video Game Hour Live, a program under Texas Student Television.

“People love authenticity,” Daley said. “If you’re being as real as you possibly can, and you’re actually enjoying what you’re doing, then you’re more likely going to not only enjoy doing Twitch, but you might even gain a little bit of an audience while you’re at it.”