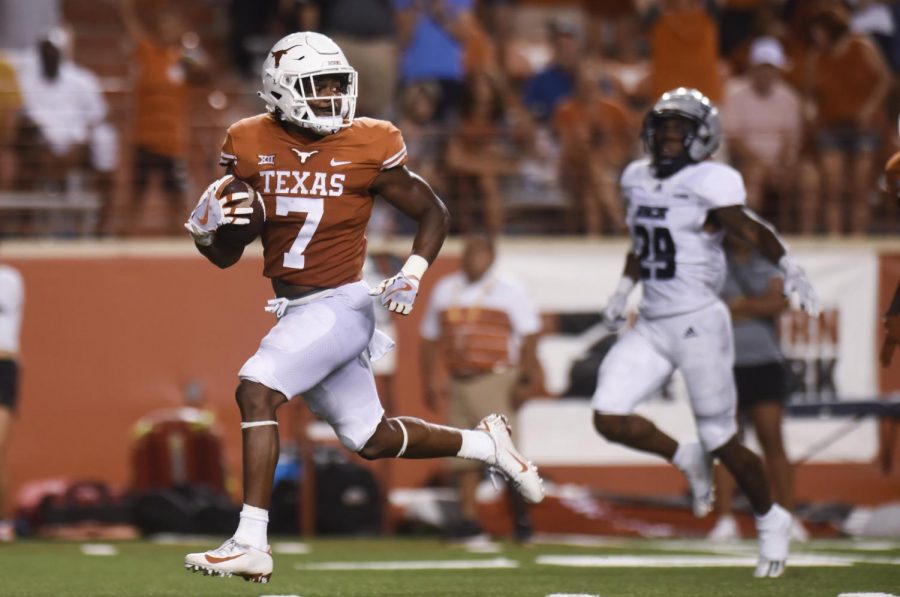 After taking a “big bite out of the humble pie,” football head coach Steve Sarkisian and the Longhorns refocused and kept their opponent scoreless for the first time since 2017.

The win against Rice could have been predicted, but fans were more focused on what changed since the Southeastern Conference knockdown and what improvements still remain.

Going for it on fourth down is usually a gutsy call, but it paid off for Texas in the first possession of the game. Redshirt junior quarterback Casey Thompson connected with freshman wide receiver Xavier Worthy for a 31-yard gain landing in the red zone. The Longhorns demonstrated they had mentally moved past their defeat in that play. This intentional mentality Sarkisian emphasized in the postgame showed through the rest of the game.

Zero penalties is always the goal, but Texas only committing two penalties totaling 12 yards is a noteworthy achievement. Last season, the Longhorns averaged 77 yards loss per game due to penalties and the team started this season with a worrisome seven penalties totaling 64 yards.  Will this be the team that shoots themselves in the hooves again? Hopefully not. Penalties per game are declining. Hopefully, this trend continues.

Texas dominated the run game, netting 427 yards while the Owls only rushed 156 yards. Sophomore running back Bijan Robinson topped the leaderboard with a net gain of 127 yards and junior running back Roschon Johnson followed with 112 yards. Robinson earned his spot in the 1,000 yard rushing club. Blocking definitely played a part, but the physicality and determination to extend the drive is impressive. Seeing this number in upcoming conference matches is unlikely, but Texas has made it clear this will be a strong element of their gameplay.

While the run blockage was solid, pass protection was severely lacking. In the second possession of the game, the offensive line broke down which led to a quarterback hurry and a pick off by the Owls.

“We had a couple things in protection breakdowns that we definitely need to clean up,” Sarkisian said.

Although it doesn’t show  in the game stats, the Texas quarterback was pressured and hurried a handful of other times. The offensive line needs to get tougher in order to give Thompson more time in the pocket and keep the defense at a safe distance.

The passing game suffered. Texas only threw for 193 yards in the win. Last season the Longhorns averaged about 280 yards per game. The Owls were not far behind, especially for a team that did not score, at 128 yards. This isn’t about the inability to connect, but about the time in the pocket. The poor passing game goes back to the offensive line, which needs to give the quarterback and wide receivers more time to run the routes and make those connections. Sarkisian said the passing game is something the Longhorns “just got to keep working on.”

Overall, Texas held the ball on offense 1.08 minutes less than Rice. Shocking, no? For a blowout game, the winning team should have a large difference in time of possession, if not a greater one at the very least. The Longhorns had some big plays which covered a lot of yardage in a short amount of time. However, this statistic shows that Texas is still giving their opponent too much time with the ball and a better chance of scoring.

Xavier Worthy stole the show with 88 receiving yards against Rice. He tops the Longhorn leaderboard with 163 receiving yards overall. If Texas can sharpen the o-line and make those passing connections that fans just got a glimpse of, the Thompson-Worthy match-up could be a great facet for the offense.

Keilan Robinson, junior transfer running back, made an impression on fans and coaching staff. He showed his versatility, gaining 83 rushing yards on offense and blocking the punt return on defense.

Although ESPN favors the Longhorns to win against Texas Tech this Saturday, the match will test the Longhorn’s gameplay. This in-state rivalry is eagerly anticipated and fans are waiting to see what, good and bad, will carry over into conference play.