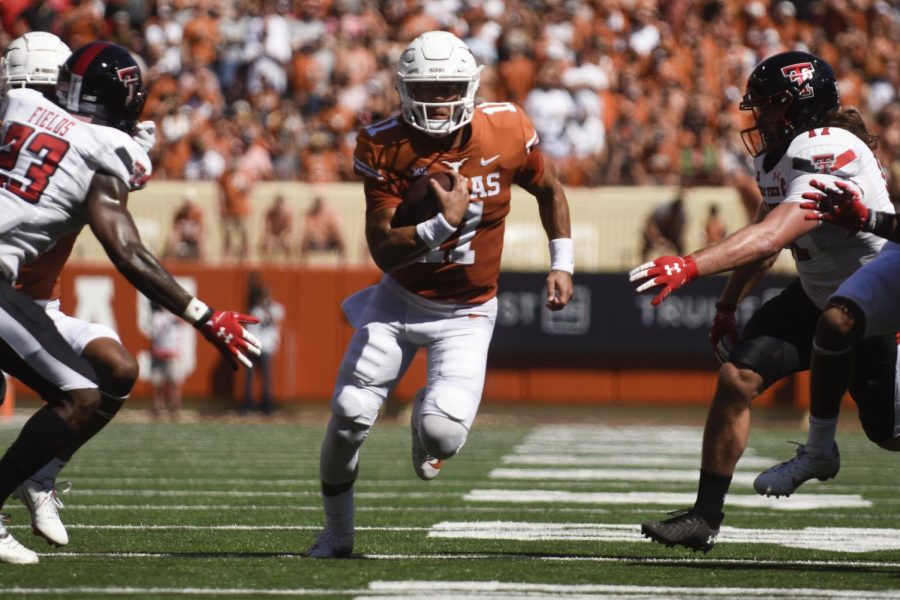 It seems like every time Casey Thompson touches the football, it turns to gold.

It’s a stat that everyone has seen by now but one that continues to become more mind boggling as time goes on — Thompson has led the Texas offense on 24 scoring drives in the last 27 drives he’s engineered dating back to the 2020 Alamo Bowl.

Saturday’s 70-35 blowout win over Texas Tech at Darrel K Royal-Texas Memorial Stadium was just a continuation of that same trend for the junior quarterback. In the first half, when Texas established its insurmountable lead, the Longhorn offense took the field five times and scored five touchdowns. Thompson accounted for three of them himself.

By the time Thompson was relieved of his duties in the third quarter, he finished with 303 yards and 6 total touchdowns with a 78 percent completion percentage. The longer the fourth-year quarterback continues to excel at the helm of the Longhorns’ offense, the more puzzling head coach Steve Sarkisian’s long hook on redshirt freshman quarterback Hudson Card in the Arkansas loss becomes.

Despite his gaudy numbers, Thompson did reveal himself to be human at one point. He had just been gifted opportunistic field position from junior linebacker Luke Brockermeyer’s tip-drill interception on Texas Tech’s first drive of the second half, setting up the Longhorns with a chance to blow the game wide, wide open.

After two plays of little gain and a holding penalty, Thompson faced a third-and-15 from the Red Raiders’ 30-yard line. After scooting out of the pocket, he turned down an opportunity to scramble for a few yards to set up a field goal. Instead, he launched one toward sophomore wide receiver Jordan Whittington in the end zone.

The space that appeared open initially was closed by the time Thompson let go of it. The ill-advised throw was easily picked off by Texas Tech safety Dadrion Taylor-Demerson, making it Thompson’s second interception of the season.

“I think I could’ve done a better job just assessing the situation in the moment, either using my legs or throwing the ball away,” Thompson said. “But I will say there’s going to be a time where I will have to make those risky throws in the back of the end zone … so I learned from it.”

The hiccup was just a small blip on Thompson’s afternoon. The signal caller flashed his special connection with wideout Xavier Worthy all game, hooking up with the standout freshman for one touchdown in the first half and two in the second for 100 yards on five completions.

“He doesn’t back down to any challenge,” Thompson said about Worthy. “He likes to compete and he never backs down. Xavier does a great job with his speed and quickness, and I think that showed today.”

The point of the question is to remind the Longhorns of the road that still lies ahead. Thompson took that message to heart.