3 for 3: The good, the bad and the future in Texas Football 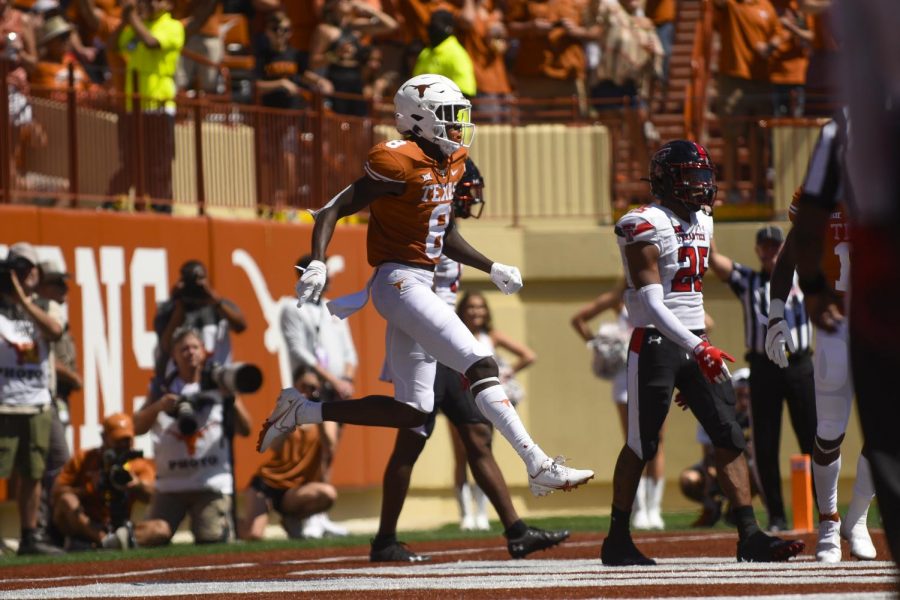 The Longhorns’ win against Texas Tech last Saturday hinted at what fans haven’t seen from Texas in years: consistency.

Coming into the game after a blowout, the Longhorns kept their intensity and stampeded their first conference match-up.

Texas demonstrated against Tech just how lethal it can be on the ground, rushing for 336 yards on 52 rushing attempts. Atop the stat sheet again was sophomore running back Bijan Robinson with 137 rushing yards. Junior running back Roschon Johnson ran for 64 yards and scored two touchdowns.

The offensive line was a solid force that allowed the Longhorns to perform on offense. The run blockage, like against Rice, was there. What changed from last week was on passing plays. The o-line gave junior quarterback Casey Thompson ample time in the pocket to look at his options and convert. As a result, Thompson threw for 303 yards and five touchdown passes. Freshman wide receiver Xavier Worthy caught five of Thompson’s passes for 100 yards and three touchdowns.

Flipping to the other side of the ball, the defense was disruptive. Texas had two quarterback hurries, notched two sacks, and senior defensive back Josh Thompson snagged a pick six in the second quarter to solidify a 21-point lead.

The defensive mentality in the second half waned, allowing Tech to score three times. In the middle of the third quarter, the Red Raiders gained 75 yards and scored on three plays. On the next possession, Tech quarterback Henry Colombi threw a 75-yard touchdown on first down bringing Tech to 28 points.

Third and fourth down situations were also a problem for the Longhorns in the second half. Tech was successful on two of its five third down attempts, one being for 16 yards. In the fourth quarter, the Raiders converted on both fourth down attempts.

“Our mental intensity is going to be critical,” head coach Steve Sarkisian said. “There’s a lot of high powered offenses in our league, and people aren’t going to stop trying to score because we get a lead.”

Texas’ defensive backs got burned a few times, but the hardest to watch was in the third quarter, when Tech wide receiver Loic Fouonji fought on the route with senior defensive back D’Shawn Jamison and made a 69-yard touchdown reception. With more powerful Big 12 offenses on the horizon, there isn’t much room for small mistakes like this that lead to big plays.

The passing game still has some ways to go, although it has improved. Half of Texas’ touchdowns came through the air, but there were still some missed opportunities and Thompson threw an interception in the first possession of the second half.

“There were probably three, four, five opportunities down the field that we just missed on,” Sarkisian said. “Hopefully when we start to hit some of those down the field, we’ll become even more efficient on the offense.”

No Texas fan can forget last season’s game against TCU. With four minutes left in the fourth quarter, the Longhorns had an opportunity to surpass the Horned Frogs’ four point lead. On first-and-goal, former Texas running back Keaontay Ingram fumbled the ball on the one yard line and TCU recovered, ending the game at 33-31.

If the Longhorns have anything to prove, their game against the Horned Frogs this weekend is the place to prove it. The consistency shown in the last two games is noteworthy, but Sarkisian said this isn’t the time to relax.

“We’ve got unfinished business,” Sarkisian said. “We’ve got work to do.”