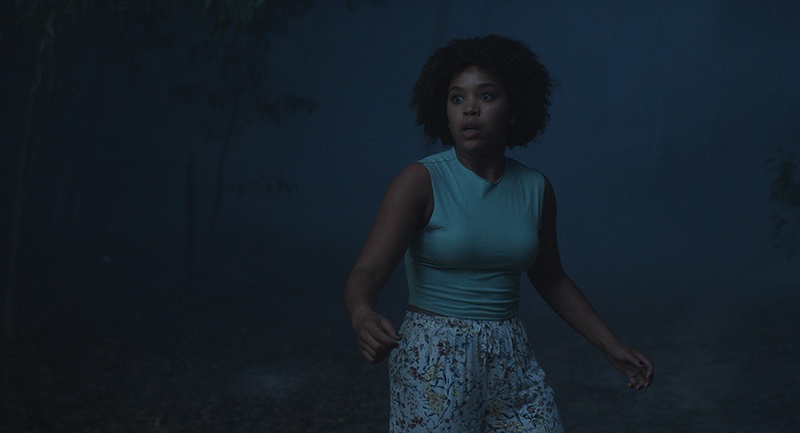 No better place for a slumber party than a remote cabin in the woods.

“Slumber Party Massacre,” a remake of the 1982 classic slasher of the same name, follows a group of teenage girls who head to a remote lake house to have a (you guessed it) slumber party. Reminiscent of a slaying that occurred over 20 years prior, a maniacal man with a giant drill hunts down the girls one by one. Teaming up with a cabin full of himbos across the lake, the teenagers decide to fight against their certain death. Director Danishka Esterhazy’s slasher re-imagining premieres on the Syfy Channel Oct. 16.

Seamlessly shifting from straight up slasher horror to comedic satire, Esterhazy dishes out blood splattered scares and laughs in rapid succession. While the film opens with a strange, almost dry tone, it soon picks up pace and finds its gore-tastic identity. The narrative continually twists and turns, elevating and shifting into subversive territory. Much like the original slasher, “Massacre” seeks to challenge and reverse the typical male gaze approach of the subgenre, emphasizing a female perspective.

The ensemble cast suit the classic slasher aesthetic well, offering their unique takes on the archetypes often featured throughout the genre. Reze-Tiana Wessels shines with her hilariously ditzy performance as Ashley. Hannah Gonera anchors the ensemble cast with her strong willed performance as Dana. The Driller Killer springs back to life with a ghoulishly comical performance from Rob van Vuuren, hilariously making use of the often phallic interpretations of classic slasher characters.

Michael Lawrence Potter’s John and Arthur Falko’s Chad hysterically lead a second ensemble of mindless bros living across the lake from the protagonists. Their brain dead humor and complete obliviousness provide a chuckle inducing contrast with the intelligent leading characters. Esterhazy cleverly flips the slasher archetype on its head, making the men fill the role of objectified bodies just waiting to be slashed.

Cinematography wise, this re-imagining of “Massacre” switches between a variety of styles. The film opts for flatter, simpler framing for the more comedic moments and shifts to dark, cinematic approaches for the intensive horror moments. In combination with the narrative twists, the dynamic cinematic style makes this remake feel as if it is three distinct films in one. Each style represents a different approach to exploring the slasher subgenre.

For gore hounds, the film provides plenty of gross out slasher moments. Standouts include a grisly kill with the mechanics of a car hood and an unnerving face shredding attack.