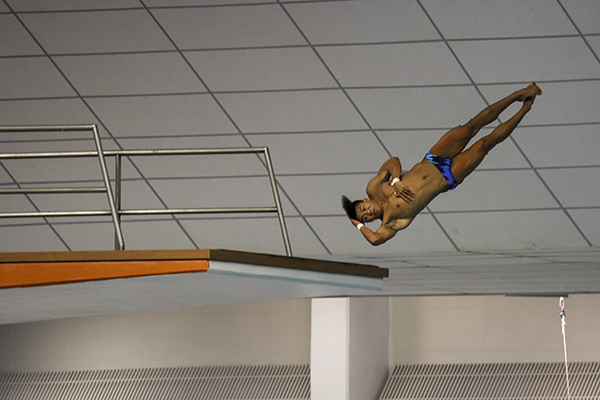 Editor’s Note: This article first appeared as part of the September 21 flipbook.

Fresh off another NCAA championship, the Texas men’s swim and dive team made waves with their 42nd conference win and 25th Big 12 team title, led by head coach Eddie Reese.

This year, the team looks to take charge once again with a full returning lineup and seven new freshmen to keep the hype of Texas swim and dive alive.

Here are five key contributors to be on the lookout for this season:

Known for his exceptional performances in the platform, 1-meter and 3-meter dives, Windle has been breaking school records since his freshman year. Coming back for his fifth season on the team as a graduate student, Windle received the Big 12 Men’s Diver of the Year achievement three times and is a nine-time All American. This past season, he placed first in the 1-meter, third in 3-meter and fourth on platform at the NCAA Division 1 Championships.

Windle’s success hasn’t been limited to the collegiate level; he recently qualified and competed for Team USA in the 2020 Tokyo Olympic Games, placing 9th in both the semi-final and final rounds of men’s 10-meter platform diving.

“It meant a lot to be able to qualify for the Olympics; it’s been a 15-year journey,” Windle said in an interview with the NCAA in August. “I’ve reached a ton of my goals that I set for myself early on in my career purely because I’ve been able to have … (Texas’) support with me.”

Corbeau has definitely proved himself to be a powerhouse for the Longhorns. Right off the bat during his freshman season in 2019, Corbeau began racking up the first place titles in the 100 meter and 200 meter breaststroke, including at the 2020 NCAA Big 12 Championships. The junior made another appearance at the Big 12 Championship this past season with a first place title in both the 100 and 200-meter breaststroke yet again, making him a two-time Big 12 champion.

Returning for his fourth year on the team, Kibler is on a mission to finish what he started. The three-time All American swimmer currently holds the NCAA, American and U.S. Open records for the 800 freestyle relay and is a four-time Big 12 Champion. During this past season’s NCAA Division 1 Championships, Kibler tied second for with teammate, Daniel Krueger, in the 100-yard freestyle. Kibler’s performance helped the Longhorns become the top swimming team in the country once again, and he plans on keeping it that way.

Despite having only been on the team for one year, Foster has become a key asset to the team’s continuous success. Foster is a 2021 Big 12 Champion in the 200-yard IM, 400-yard IM and 200-yard backstroke categories and a three-time finalist in this past season’s NCAA Division 1 Championships, falling short of first place in the 400-yard IM. However, this dip in the rankings didn’t stop Foster in his pursuit; he placed first in the 400 L free, 200 L IM and 400 IM in Austin’s Speedo Sectionals in July.

Grimm, a fresh face for the Longhorns, announced his commitment to UT back in October of 2019 and has long awaited his time to jump in head first into the collegiate pool. Grimm suffered a stress fracture in his lower right side of his back during his junior year of high school and was on the bench for 2 months, but just six weeks after his recovery, he won the state title for the 50 freestyle and 100-meter breaststroke, leading his school to a third place finish overall. Grimm was ranked the top swimmer in the state of Virginia for the 6A Division and a top recruit in the 2021 graduating class.