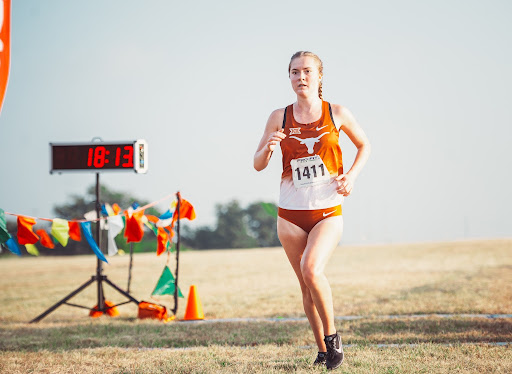 Editor’s Note: This article first appeared as part of the October 1 flipbook.

Eva Jess is the only female in El Paso to break a five-minute mile.

She set the goal going into high school, but over the years, she continually missed the mark by five seconds.

Jess finally achieved the time on a day when she wasn’t feeling well ­­— the last race of her junior year.

“In that last lap, I just booked it and everybody was going crazy,” Jess said. “I was like, ‘Dang, that was not easy,’ but it felt good.”

Hailing as a graduate of El Paso Franklin High, the freshman distance runner comes to Texas with an already substantial amount of success in the sport.

Her senior quote was, “More miles, more smiles,” and the phrase became a mantra she shared with her teammates.

She made the decision to come to Texas not only because of the impressive running program, but also the great education.

Assistant coach PattiSue Plumer saw her academic achievements in high school as a major reason why she would be an overall asset to the team.

“She chose a hard school and wants to be successful as both a student and an athlete,” Plumer said. “She had managed academic and athletics really well, and so I thought it would be a good fit for the team.”

Jess was race-ready as soon as the season started.

She opened up her collegiate career by winning the women’s 5K at the Tornado Watch Invitational with a time of 18:12.2.

Jess also earned personal best times in the 6K at both the Cowboy Jamboree and the Concordia Classic, running 22:02.2 and 21:43.3, respectively.

The difference between college and high school, Jess said, is the abundance of facilities that help prevent injuries.

“In high school, if you felt something hurt, you went to the trainer,” Jess said. “In college, we don’t just go to athletic trainers because something hurts, we go to prevent things from hurting.”

It was destiny to become a runner — her parents met at an ultramarathon. She’s run four of them herself, the longest being 102 miles in 24 hours.

“My family’s support means everything,” Jess said. “I would not be as good as I am without their support. I really owe them everything.”

Jess’s passion for racing is even stronger than her devotion for running.

While being recruited by Texas, a major drawing point was Jess’s championship wins.

Not only is she a highly competitive runner, but Jess also has experience that allows her to understand the strategy of leading races. She has already put this skill to use this season despite being one of the younger competitors.

“You can train and train and train if you love (running), but you don’t necessarily know how to win,” Plumer said. “Eva doesn’t put limitations on herself and (places) herself in a position to be successful, and I think that’s really unique.”

Jess said before the season, she trained primarily with men due to her running capabilities.

“It’s so great to actually be with the ladies on my team, like actually running with them and making really good connections,” Jess said. “They’re all wonderful people and I can’t wait to go through the rest of the season and get to know them more.”