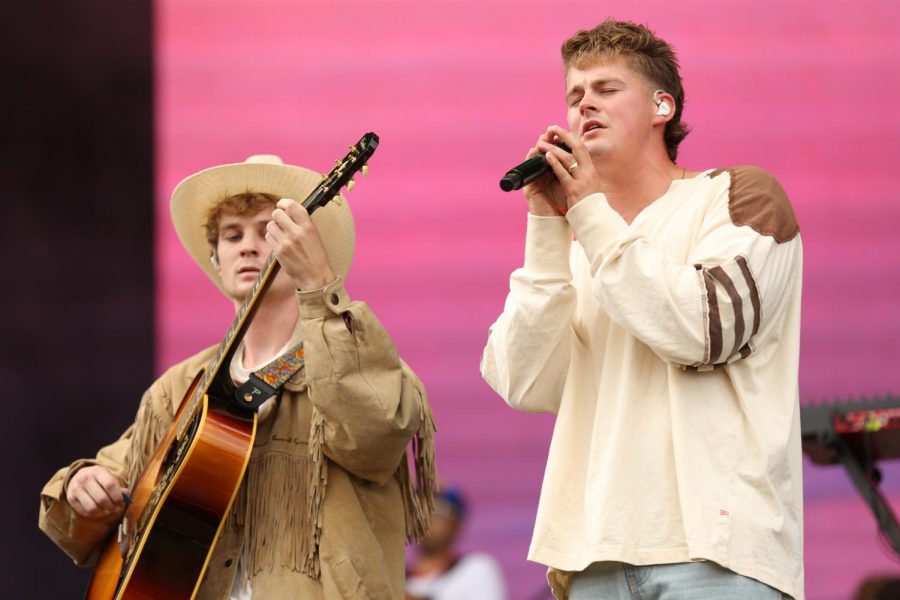 A pink and purple ombre landscape lights up the screen behind two white lawn chairs. Thousands of people scream, some holding cardboard signs made out of broken down Boxed Water boxes. Then, accompanied by upbeat guitar chords, Surfaces walks onto Honda Stage.

Dressed in their “Sunday Best,” the College Station natives had a “Good Day” at Austin City Limits Music Festival. The Daily Texan talked to the band about their new album and their new “Good 2 Be Back” tour.

The Daily Texan: How did you guys create such a distinct brand for yourself with your pastel colors and your laid back music?

Colin Padalecki: We’re just us. We like pastel colors and sunny sounds. We’re Texas boys, but everyone thinks we’re from California because we’re, I guess, beachy.

Forrest Frank: We fill in each other’s gaps in a lot of ways, and it’s really incredible. After years of working together, it’s been really cool to see how each thing fits together like a puzzle piece. (Our brand) is very cohesive.

DT: You’ve played in Austin before, but what is it like to play at ACL?

CP: We first performed (in Austin) at the Empire Control Room in front of like, 400 kids. (It was) one of our first sold out shows, and it was incredible energy back then. This is Forrest’s first time ever coming to ACL, so we are leveling up slowly. This is like the capstone. I’ve been dreaming of playing at ACL since I was 17 (or) 18 …  it’s amazing. There’s nothing like playing at home (in Texas).

DT: You guys are back on the road! What has been your favorite memory from the tour so far?

CP: It’s equally as exhausting as rewarding. It’s the best job in the world … It always takes a toll when you go back to back to back, and the crew gets pretty worn down, but we keep good spirits …There were a lot of cool scenic parts. Like we stayed in Utah in a canyon-like hotel (with) cool rock formations and nice campfires. It’s a really special place. Forrest likes to say it’s half vacation, half some of the hardest work you’ll ever do.

FF: Right (after) we finish the show, and we all walk back into the hallway, back in the green room, that relief of, “Wow, we just laid it all out there.”

FF: We weren’t setting out to make a 20 song project. Our intention was to set some time out just to make music, whether we made three songs or 40 — who knows? We took half a month and went to Malibu and stayed in an Airbnb and just made songs all day.

CP: That was October 2020. That Airbnb was immaculate. It was like overlooking a cliffside ocean view, and we just wanted to make an album that kind of like sonically represented the view.