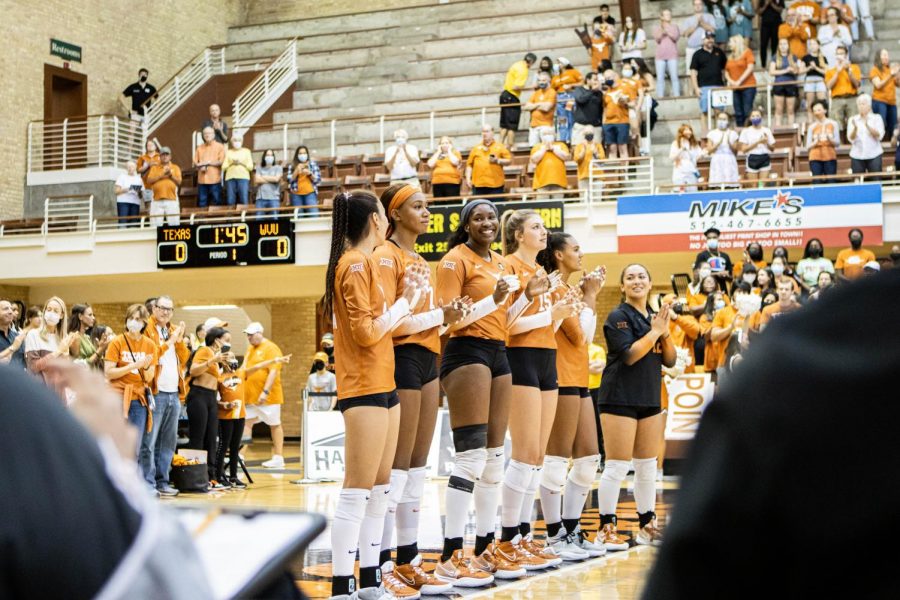 Here are some of the most exciting matchups for the upcoming week in Texas athletics that fans won’t want to miss:

Texas volleyball is red-hot right now going into its next series against TCU 14–0 on the season. Last Saturday, the Longhorns faced an 0-2 deficit versus Kansas only to win the next five sets to secure the victory and win in straight sets Sunday to advance to 4–0 in conference play. Junior opposite hitter Skylar Fields had a stellar run of games against Kansas and looks to carry that momentum through the rest of the season. Fields had a combined 36 kills against Kansas, with a season high 26 of those coming from game one. Junior outside hitter Logan Eggleston continues to be the linchpin for the Longhorns, as she consistently racks up kills, blocks and digs on a nightly basis.

TCU’s two best attacking players are junior outside hitter Julia Adams and junior middle blocker MyKayla Myers, who both excel at getting kills at a high clip. Adams leads the team in total kills and kills per set, however it is Myers who has a .339 hit percentage, which is over 10% better than Adams’ .200 hit percentage. Myers is a dominant force in the middle of TCU’s lineup, while Adams is a high volume hitter who looks to continuously pound the ball into the Texas defense.

If Texas can continue to keep TCU’s hit percentage low and mitigate the impact of Myers with well placed strikes, the Longhorns should have no trouble continuing their dominant stretch of volleyball with another win against the TCU Horned Frogs on Friday.

This weekend is pivotal for the Longhorns coming off of last week’s heartbreaking loss to Oklahoma in Dallas. Oklahoma State is currently ranked 12th in the nation and has yet to lose a game this season, which makes this a marquee matchup. There are also a number of high profile recruits coming to Austin for the game, notably five-star quarterback Arch Manning, a highly recruited player in the class of 2023.

Texas fell short last weekend due to poor blocking up front and a defense that got torched by true freshman quarterback Caleb Williams, who the crowd incessantly chanted for in the first half.

This week, head coach Steve Sarkisian is looking to switch things up on the line with senior offensive lineman Derek Kerstetter moving back to right tackle and Tope Imade, sixth year offensive lineman, making his first career start at guard against Oklahoma State. If the Longhorns can consistently block for Bijan Robinson, sophomore running back, Texas can keep its defense off the field with a strong running game, which will help prevent another second half collapse by an exhausted defense.

Oklahoma State is led by redshirt senior running back Jaylen Warren, who has been its most impactful player on offense by far this year. Warren averages over 100 yards per game on the ground and keeps the offense moving. Redshirt junior quarterback Spencer Sanders is shaky at best, having thrown three interceptions against Baylor in his last game. If Texas can capitalize on turnovers like Bayor did, the Longhorns should be able to put this game out of reach before halftime, assuming everything goes to plan.

This will not be an easy game, as Texas has its hands full against a physical front seven and a fierce rushing attack this Saturday at Darrell K Royal-Texas Memorial Stadium.

While this game is not televised, it is a game that many people will want to make the trip for. The Longhorns are heading to College Station for a scrimmage against the Texas A&M Aggies.

Texas has already beaten A&M once this year in volleyball. While this game is a scrimmage, Texas fans love to see the burnt orange prevail over maroon no matter the occasion. The game will be a 10 inning scrimmage against the toughest team that the Longhorns will face this fall, as the Aggies are the only Power Five opponent on the fall schedule for Texas. If fans want a good gauge of how their team stacks up this year, this Sunday is the best opportunity.