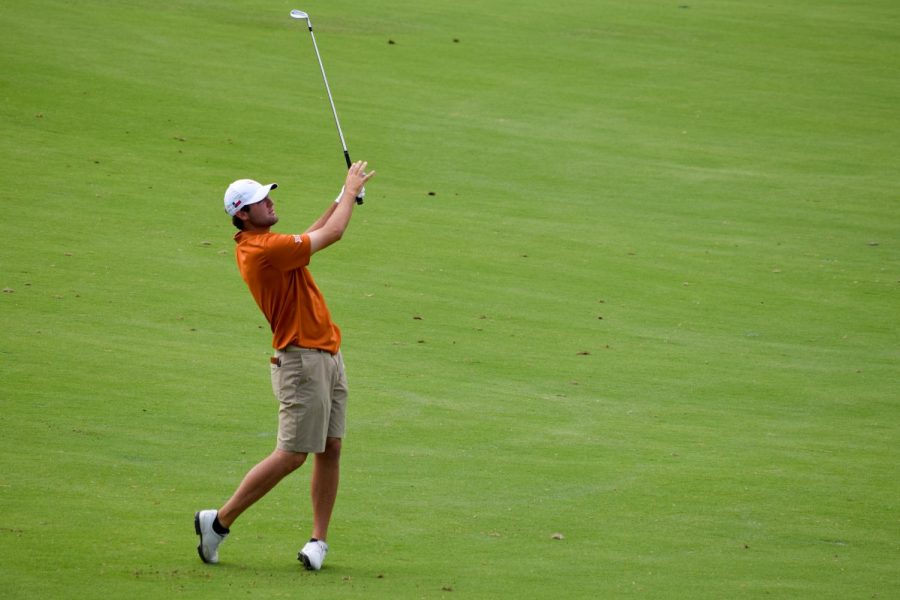 Pierceson Coody and Mason Nome highlighted Texas’ performance en route to its championship victory over Texas Tech to put a stamp on the fall season.

The No. 5 Longhorns men’s golf team took first in conference competition at the Big 12 Match Play. Texas knocked off nine Big 12 schools, including No. 1 Oklahoma and No. 2 Oklahoma State, at The Clubs at Houston Oaks in Hockley, Texas, this week. Competing for the Longhorns were seniors Pierceson Coody, Parker Coody and Cole Hammer; and juniors Nome, Travis Vick and Will Thomson

Texas competed in four pool play sessions spread out over the course of Monday, Tuesday and Wednesday morning, with each session consisting of six individual competitions. Following Wednesday’s final session of pool play, the top finishers in each pool faced off in the championship round Wednesday afternoon.

Pierceson and Nome led the way for Texas, securing four wins and no losses or ties through Monday and Tuesday.

Texas defeated TCU and Baylor in Monday’s double-header behind a combined 9-3 performance through both rounds. Pierceson, Vick and Nome all went without a loss or tie Monday, securing six of Texas’ nine wins on day one. Thomson also earned a win over junior Luke Dossey from Baylor in Monday’s second session.

Going into their second day of competition, the Longhorns tied with Oklahoma State for the lead in their pool (which also included TCU, Iowa State and Baylor) with six points.

Texas had Tuesday morning off but hit the course for its third session in the afternoon.

The Longhorns competed in session three against Iowa State, beating them with three wins from Pierceson, Vick and Nome, and three ties. The trio remained unbeaten during day one and two of competition, while their team also remained undefeated carrying three wins and no losses or ties heading into Wednesday’s final round.

Texas pulled away from its top pool competitor, No. 2 Oklahoma State on Tuesday, tacking on a win against ISU to add three points for the Longhorns and put their total at nine points. Also in its third session, Oklahoma State tied TCU, giving them one point and a total of seven points heading into Wednesday’s final round of pool play.

Texas carried the highest seed in its pool heading into Wednesday and would face off against second place Oklahoma State in the final round.

The Longhorns tied the Cowboys, giving each team a point and Texas the first place finish in Pool B.  The Coody twins and Nome both took individual wins in Texas’ final round bout against Oklahoma State.

In the championship round Wednesday afternoon, the Longhorns defeated No. 10 Texas Tech behind individual wins from Pierceson, Nome and Hammer, taking home their first first-place finish of the season and topping its Big 12 competitors for the Longhorns’ first Big 12 Match Play title since the event began in 2018.

Through the four pool play sessions, Pierceson and Nome were perfect with four wins and no losses or ties, and the whole Texas squad finished strong in both pool play and the championship round.

Texas’ victory at matchplay caps off its fall season in dominant fashion. The Longhorns will next see competitive action in late January at the Southwestern Invitational Collegiate in Westlake Village, California.