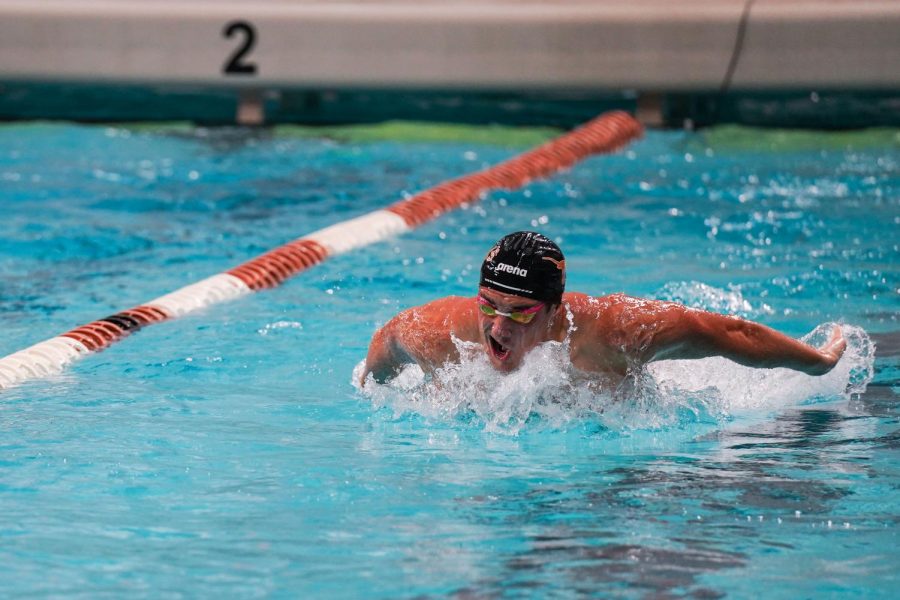 After a colossal win over Incarnate Word last Friday, the top-ranked Texas men’s swim and dive team hoped to continue that magic against No. 16 Texas A&M this week in College Station.

The Longhorns did not disappoint in their first away meet, with a final score of 185 to the Aggies’ 107.

In fact, a multitude of athletes captured their first NCAA “B” cut record times, with Jake Foster claiming the 200-yard butterfly and the 200-yard breaststroke and Krueger with the 100-yard freestyle.

Sophomore all-star David Johnston racked up more points for the Longhorns with his first individual win of the season in the 1000-yard freestyle event, coming in at 8:57.37 and being the only competitor to scale just below the nine minute mark. Johnston made an impressive attempt at first place at last week’s meet, falling to second place by just milliseconds against his teammate Carson Foster, but made a comeback to tackle first place with a three second improvement.

The team pulled numerous first through third finishes, including in the 100-yard backstroke and the 50-yard and 200-yard freestyle, with top performances by seniors Drew Kibler, Krueger and graduate Alvin Jiang. These triple threats are crucial to the Longhorns’ winning streak and keep the momentum building between teammates to create a perfect flow of chemistry and confidence.

The Horns will continue their journey on the road, this time traveling to Charlottesville, Virginia, to compete in a double meet from Nov. 5 and 6 against No. 9 University of Virginia.