No. 1 Texas cruises to 3-0 victory against TCU 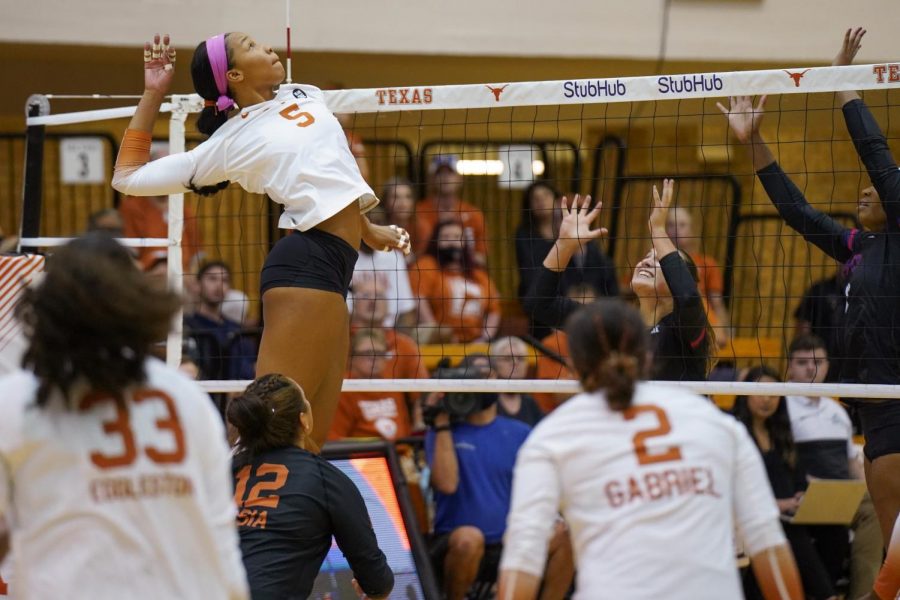 All was right for Texas volleyball Friday night.

The stands were packed with Longhorn fans. Logan Eggleston hit the ball with a hearty thwap for kill after kill. Melanie Parra served four service aces in a row. And the team marched to a 3-0 victory.

In their second match this week, unranked TCU quickly fell to powerful play by the Longhorns. While the No. 1 Texas team usually witnesses strong performances by players like juniors Skylar Fields and Eggleston, Friday night featured impressive plays across the board.

Asjia O’Neal, redshirt junior middle blocker, attacked TCU with six kills and a .500 hitting percentage. Junior Molly Phillips shut the Horned Frogs down with three kills of her own.

“We were just having a lot of fun,” Fields said. “It’s always fun to play at (Gregory Gym), the crowd gets us hyped. The energy here makes us have positive energy on the court.”

The Longhorns pulled ahead without much struggle in the first set thanks to four kills by outside hitter Logan Eggleston and five service aces by the Longhorns overall. By the second half of the set, Texas was rotating in younger players including sophomore Reilly Heinrich, who had five digs in the match.

“It was fun to have Reilly out there,” Fields said. “She works hard every day in practice to get the opportunity to go out there and execute, so I was really excited to see that.”

The second set ended in similar fashion to the first, with Longhorns up 25-14. Texas left TCU with a -.028 hitting percentage compared to their .375. Senior Brionne Butler came out with powerhouse plays on the front row that the Horned Frogs couldn’t bring back across the net, finishing the match with six kills and five block assists.

Throughout the night, almost every player on the Texas side of the net came up with a strong play.

“I think we did a good job of just getting good first-ball touches,” Fields said. “We were able to distribute the ball evenly and we trust one another to put the ball where it needs to go.”

TCU put up a fight in the third set, holding the lead until a string of four service aces from Parra brought the Longhorns in front 17-16. The teams stuck neck and neck for the remainder of the set until Texas squeezed out a 25-22 victory with a kill by Parra.

The Horned Frogs, who are 7-8 on the season and 1-4 in conference play, struggled throughout the night. The team ended with a .096 hitting percentage and 11 reception errors.

“Our service got them off,” Elliott said. “You can see, when we get teams off the net, if they don’t have big-time guns it’s a struggle for the other team to keep up with us.”

The Longhorns will travel on Wednesday to Ames, Iowa to face off next Thursday and Friday against Iowa State. Before the team heads into next week, Fields said she plans to relax, enjoy her weekend and watch Texas football on Saturday.