No. 25 Texas draws against Baylor 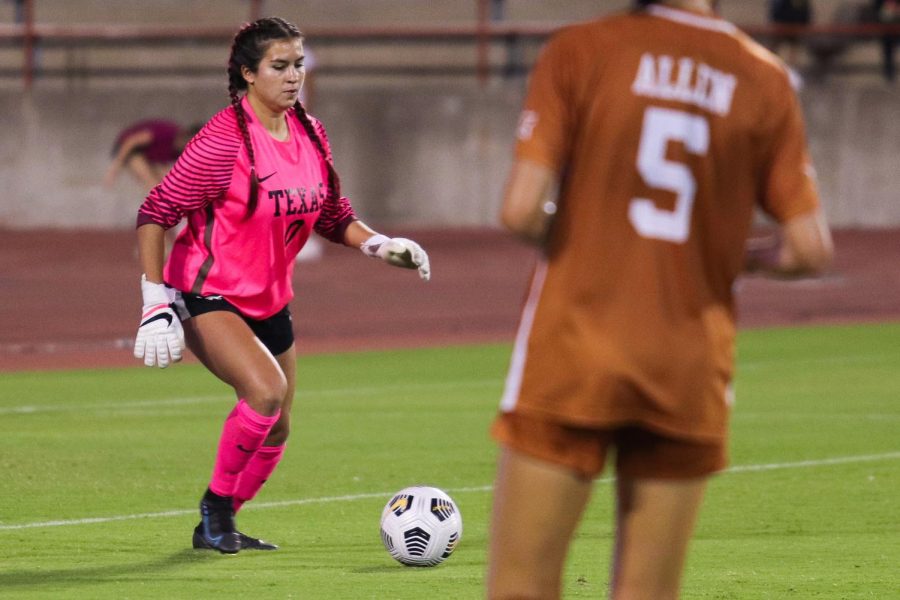 In the closing seconds of overtime, Texas won a corner as multiple players raced to get the ball in place. Freshman midfielder Lexi Missimo took her stance by the flag and sent in a ball deflected out by a Baylor defender.

Longhorn players raced to the other flag to send another ball into the box, but they did not have enough time. As soon as the ball was kicked, the clock struck zero as two of the top teams in the Big 12 neared 110 minutes. Neither team could find the back of the net Friday night as No. 25 Texas drew to Baylor.

In the first period of play at the Betty Lou Mays Soccer Field in Waco, both teams combined for 13 shots but neither one had any quality chances. The Bears and Longhorns decided to ease into the game, defending deep instead of pressing up.

Near the 60th minute mark, freshman forward Trinity Byars had one of the best opportunities for the Longhorns. Byars, keen on scoring, put too much power behind the ball as it sailed over the crossbar.

Texas continued to try to play their possession-based ball, but Baylor finally found a quality chance when freshman defender Ava Colberg carried the ball down the left side of the field. Colberg tried to play a ball to the top of the box for a teammate, and three separate Longhorns deflected the pass.

However, the Baylor freshman was there to collect the ball.

Colberg took a dribble toward the top of the box and sent a winding ball toward goal. Fifth year goalkeeper Savannah Madden was ready though, watching the ball all the way as she jumped into the air and tipped it over the crossbar leaving the game scoreless.

With only a limited number of chances, the game was destined to go to overtime, where Texas started to find more quality chances.

Off a corner kick, a Baylor player jumped above everyone else trying to head the ball into the net. Instead of powering the ball into the back of the net, she sent it into the ground, but it didn’t have enough pace as Madden captured the ball.

Shortly after Baylor’s chance, freshman midfielder Lexi Missimo collected the ball at the top of the box and made a move to make the defender go the wrong way. Missimo tried to power a shot at the goal but  the goalie predicted her shot like a fortune teller and Missimo’s opportunity was stopped.

Texas almost came close to winning in the second period of overtime when a ball was sent into the box for Missimo. Missimo attempted to fire off a shot on her first touch, but a Baylor defender cleared it before she could make any contact with the ball.

The Longhorns only have three more games before vying for the Big 12 Soccer Championship. If they continue to either win or draw, they could potentially hold the No. 1 ranking throughout the tournament.

Texas will return home Thursday to play West Virginia in their second to last home game in front of the Longhorn faithful.