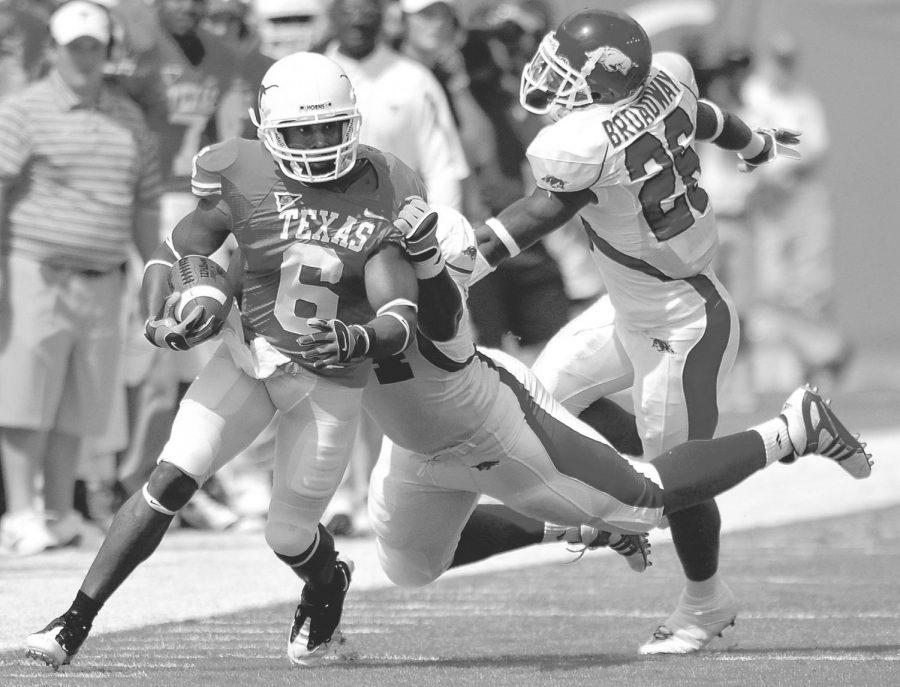 The Longhorns will experience a taste of the SEC when they face off against Arkansas on Saturday, but 2025 — the year Texas and Oklahoma are scheduled to join the conference — will not be the first time the Longhorns and Razorbacks play one another in the same league. Until 1991, Texas and Arkansas were both part of the now-defunct Southwest Conference, where the two faced off regularly.

During their time in the SWC, the Longhorns won three national championships while Arkansas won one before each went their separate ways to the Big 12 and SEC, respectively. Since then, meetings of the two programs have been sparse and victories have been split. As of their last meeting in 2014, Texas has won two of the past four games.

To look at arguably the most defining matchup between Texas and Arkansas, the pages turn all the way back to 1964. The Razorbacks met the Longhorns in Austin on Oct. 17, 1964, where Texas, fresh off of a national championship season, endured a heartbreaking loss to Arkansas.

At the time of the first snap, No. 1 Texas, led by legendary head coach Darrell Royal, enjoyed a 15-game winning streak. However, No. 8 Arkansas had plans to end Texas’ perfect record.  Both programs went head-to-head in a defensive showdown, with zero points put up on the scoreboard in the first quarter.

As both the Razorbacks and Longhorns headed back to the field to finish out 30 more minutes of a football game, both teams continued in their offensive struggles. Neither squad scored points in the third quarter. The Longhorns dug their heels into the ground to find some much-needed momentum, and then Texas charged the field with 46 yards on a singular drive. Longhorns wingback Phil Harris found his way into the endzone to tie the game at 7-7.

But Arkansas didn’t take much time to strike back on a 5:22 drive, completing a 34-yard touchdown pass with less than seven minutes remaining in the fourth quarter. Texas, desperate for another drive to the house, drove 70 yards down the field and put up another six with just over a minute left on the clock. With the score at 13-14, Texas had a decision to make: complete a 2-point conversion and secure a win, or settle for a tie –– at a time before college football established overtime rules.

The Longhorns attempted the 2-point conversion, but the effort fell short as Razorback defenders batted down quarterback Marvin Kristynik’s pass. Arkansas won by a hair, ending the Longhorns’ victory streak with a 14-13 final score.

The 1964 October showdown became a turning point in Arkansas’ season — a season they were crowned, partially, as national champions. At the end of the regular season, the AP Poll declared the Alabama Crimson Tide as national champions. However, during bowl season, Texas toppled Alabama in the Orange Bowl. The Longhorns’ Orange Bowl win left Arkansas as the only team to defeat the team who beat Alabama, leading the Football Writers Association of America to declare the Razorbacks national champions.

History in the Making: