Introducing Sam Pittman, the coach in charge of bringing Arkansas back to national prominence 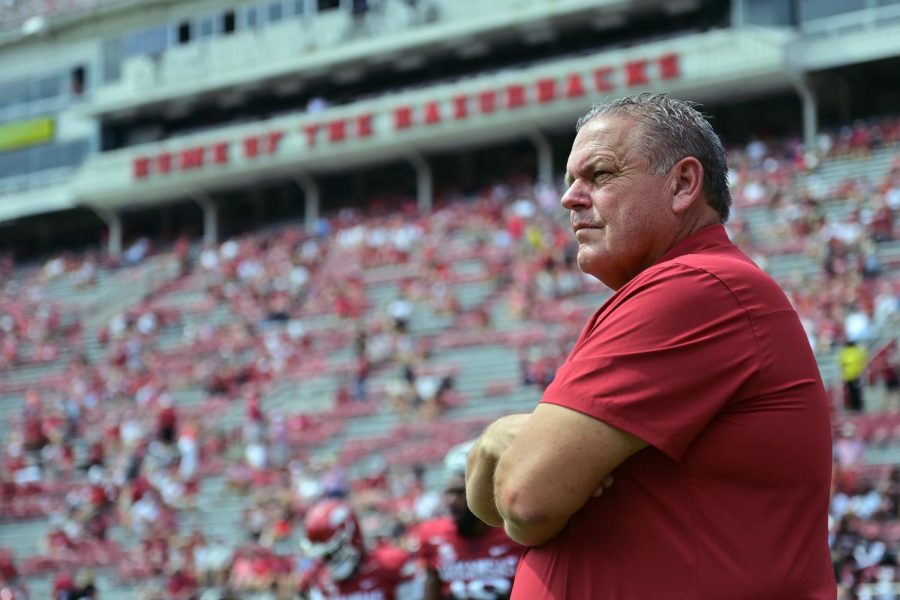 Courtesy of the SEC

After Chad Morris was fired as the head football coach at Arkansas in 2019, speculations circled about who was going to take the reins to a program that hadn’t secured a winning season since 2016.

The university decided to bring a familiar face back to Fayetteville, giving Sam Pittman the nod as his first collegiate head coaching position. Originally from Oklahoma, Pittman worked in multiple roles with the Razorbacks from 2013 to 2015.

Pittman came in during the 2020 season and faced an all-SEC schedule that ultimately saw Arkansas finish with a 3–7 record. While the 2020 season was a bumpy start for Pittman, the Razorbacks secured a win on Saturday against Rice and they look to continue that momentum against Texas.

The Razorbacks’ new man in charge wasn’t entirely unsuccessful during his first year in Arkansas red. The Razorbacks struggled closing out close games and out of the seven losses last season, three of them were within one possession of an Arkansas win.

Pittman found his way into Division I college football rather quickly, spending less than 10 years in high school and community college athletics. Throughout his combined 34 years of football coaching experience, Pittman has focused most of his career working around a three-point stance and the immensely important offensive line.

Having spent time with Oklahoma, Missouri and North Carolina, among other universities, Pittman’s coaching experience is extensive. While Pittman’s new title is prestigious, most would recognize him from his time under Georgia head coach Kirby Smart from 2016 to 2018, where he coached the offensive line.

During his tenure with Georgia, Pittman was an integral part of two SEC East Championships. Throughout his coaching career, Pittman has groomed seven NFL offensive linemen, all of which were selected in the first round of the NFL Draft. Pittman has also developed a total of 17 players who have gone on to the professional level since 2013.

Given Pittman’s coaching history, it is obvious that the Razorbacks’ strong suit should be the offensive line. With a full offseason under Pittman’s strength and conditioning curriculum,  Arkansas has nothing but strong and menacing individuals on both sides of the ball.

Instead of executing upon a modern air raid offense, Pittman has settled for a versatile offense that is highlighted by the run pass option. The Arkansas offense, led by redshirt sophomore quarterback KJ Jefferson, will look to swiftly move down the field and attempt to trick defenses into committing to players, creating open run pockets on the field.

With the entire coaching staff and team having a whole year of direction under Pittman, all eyes are on the new head coach in Fayetteville to see how big of a jump the program takes in year two under Pittman’s leadership.

Pittman is going to rely heavily upon coordinators Kendal Briles and Barry Odom. With an innovative, electrifying offense under Briles and an experienced defense under Odom, Pittman has assembled a staff that has the pieces to make Arkansas football successful sooner rather than later.

On Saturday night in Fayetteville, look to see how Pittman’s offensive line holds the Longhorn defense. If the Razorbacks protect the pocket and close the holes in the Texas running game, the Longhorns could face a long and quiet flight back to Austin, and Coach Pittman would be celebrating his biggest head coaching victory yet.