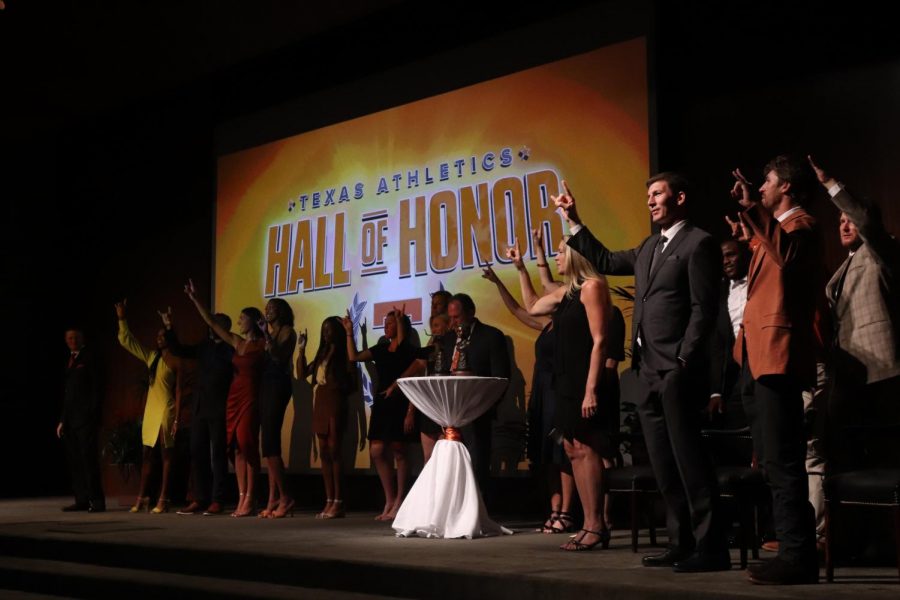 The Lady Bird Johnson Auditorium was twice as special Friday.

Ten former Texas student-athletes were inducted into the Texas Athletics Hall of Honor this past week. Fourteen selections from the previous 2020 class were recognized alongside them in the induction ceremony.

The 24 inductees were also honored during the second quarter of Saturday’s football game against Oklahoma State.

It Takes a Village

The Forty Acres has felt like home to Anderson since her first campus visit in 2004. The former Texas track and field star said that when it came time to select a college, it was important to find a place that not only developed her athletically but personally and professionally.

“Being a long way from Chicago, I needed a village to continue my development and growth,” Anderson said. “I was always encouraged to work hard and to strive to do my best, no matter what the situation. That hard work led me to become the third most decorated All-American in Texas track and field history.”

The 2011 American champion in the 60-meter dash, Anderson sprinted her way to several NCAA titles and the top of the Texas charts, including winning the NCAA outdoor 100-meter dash in her senior year in 2009.

When former wide receiver Shipley thinks of what Texas athletics represents to him, greatness comes to mind.

By the time he stepped on campus as a freshman, Shipley had broken almost every Texas high school receiving record during his time at Burnet High School. But he said it was incredible to come in and see the guys ahead of him.

“I came in as a little, probably 160-pound kid from Burnet, Texas,” Shipley said. “Going in practice every day against Michael Griffin, Aaron Ross, Earl Thomas, Michael Huff and Tarell Brown and a whole group of first team All-Americans … was a pretty big shock, but the thing about this place is that’s what you’re around when you come here.”

Icebreaker on the Diamond

Coming to a school that had three times the population of his home town, former baseball player Bradley said he was nervous on his first day at campus. However, those fears quickly washed away during a game of baseball with his classmates.

“Boy did we have a good time,” Bradley said. “Just kids playing a game that we love. That enthusiasm tracked through our playing days here at the University of Texas.”

A power-hitting catcher, Bradley teamed up with Longhorn legend Keith Moreland to lead Texas to a College World Series national championship in 1975.