Luke Brockermeyer blazes his own trail: middle linebacker starts and thrives after years as walk-on, back-up 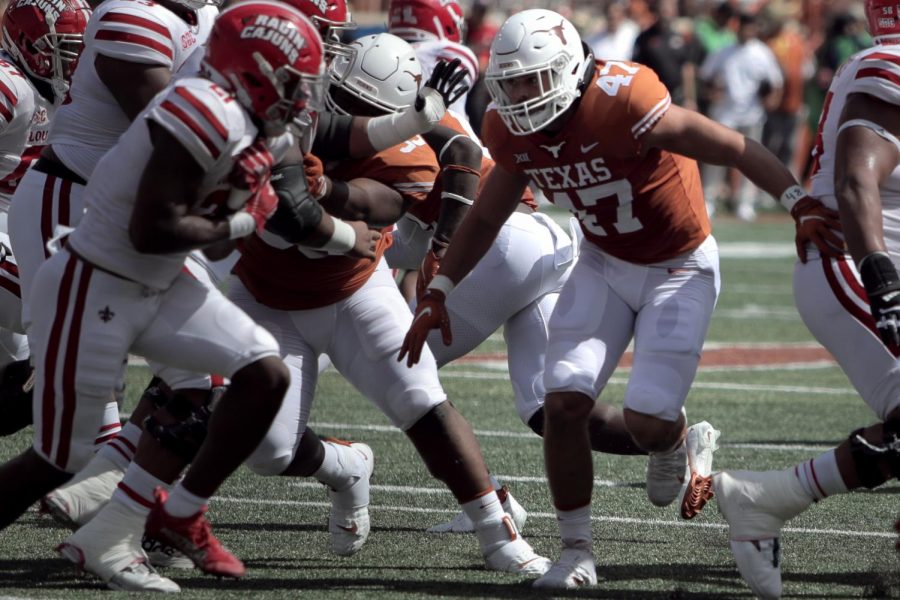 Luke Brockermeyer waited patiently for three years for a chance to play at Texas.

When the middle linebacker took his first start last Saturday, the lifelong Longhorns fan spent a moment to take it all in as he savored the crowd noise of 91,113 fans. Then, he got to work, digging in his heels to play the most snaps of any player on the Texas defense against Louisiana. Brockermeyer notched 10 tackles and anchored the middle of the defense in Texas’ 38-18 victory.

“There’s definitely times where I didn’t know if this day would come,” Brockermeyer said.

The now-junior linebacker turned down scholarship offers from other Division I programs, including Rice and Oregon State, to play at his dream school : Texas. He first joined the program as a preferred walk-on in 2018.

But Brockermeyer’s path to the field wasn’t as smooth as the generations before him.

He never saw the field in 2018 as a freshman. Brockermeyer contributed almost solely on special teams in two games the next year and five games in the 2020 pandemic season. Yet Brockermeyer, despite the lack of starting opportunities, never once considered transferring.

“I always wanted to be here and wanted to stick it out, even though, at times, it wasn’t looking great,” Brockermeyer said.

The Fort Worth product, who played for All Saints’ Episcopal High School, said he didn’t have a real position coming out of high school. Brockermeyer played tight end all the way up to his junior and senior years of high school, where he then transitioned to an edge rusher.

Brockermeyer then came to the Longhorns’ camp his freshman year as a linebacker, and he’s stuck there ever since.

“I definitely wasn’t ready early in my career to be where I am now,” Brockermeyer said. “I hadn’t played linebacker a lot out of high school, and the more reps I got, the better I got, obviously. I watched a lot of football. I watched a lot of tape. And I like to think I have a high football IQ.”

Texas head coach Steve Sarkisian agrees with Brockermeyer’s self-analysis. He called his starting middle linebacker a “smart, hard-nosed kid” with a “very high football IQ” and said the middle linebacker “recognizes and diagnoses things really well, so he communicates well with the guys on the field,” a key concept to the Texas defense.

And Sarkisian, along with a depleted depth chart heading into the offseason, gave Brockermeyer the chance to compete for playing time. The newly-hired head coach said his staff wanted to give players a chance to prove themselves beyond what happened under previous coaching staffs.

Juwan Mitchell, Texas’ star linebacker who started in 10 games during the 2020 season campaign, transferred out of Texas to Tennessee. The senior announced his entrance into the transfer portal on March 31, leaving a gaping hole open at the middle linebacker position. Texas sophomores David Gbenda and Jaylan Ford initially looked like the frontrunners to replace Mitchell’s absence, starting in the Orange-White game at linebacker.

But Brockermeyer got his first shot to start in a couple of spring practices under Sark’s new reign, showing the coaches what he showed Longhorns fans on last Saturday’s season home opener — his ability to play fast and read the offense correctly as a middle linebacker.

“After spring, I felt like it was my job to lose and (I) had a lot of confidence going into the (fall),” Brockermeyer said. “It’s just been a battle for that starting Mike spot. And I’m glad it worked out.”

That confidence clearly paid off as Brockermeyer earned the starting role.

When Brockermeyer stepped onto the field Saturday, it didn’t take him long to become acclimated to playing in front of the near-100% capacity crowd at Darrell K Royal-Texas Memorial Stadium, a stadium he had sat in many times before.

He was all over the place covering the field, in the best way a middle linebacker can be — a menace for the opposing offense. Brockermeyer combined for an early sack with senior linebacker DeMarvion Overshown and made a nice play for a tackle for loss yards toward the end of the first half.

Overshown, his partner-in-crime at the weak inside linebacker position, said Brockermeyer played 54 snaps against Louisiana, the most on the team.

“Watching film, you could definitely tell that at the beginning, he was a little shaken up,” Overshown said. “But as the game went along, I looked to the side of me. He looked comfortable, making checks, making calls like we were in practice. You can tell he got more and more relaxed and more confident.”

Brockermeyer’s first start came three years after he stepped onto the Forty Acres. Since that day three years ago, the program awarded Brockermeyer a scholarship in Texas’s bye week in September 2019, and the middle linebacker has undoubtedly come a long way.

Teammates caught Brockermeyer off guard and surprised him in a team meeting with the news that he was now a scholarship athlete for Texas football. The junior said both the scholarship and his first start have made the wait worth it.

“It’s definitely been a long time coming,” Brockermeyer said. “At the end of the day, I’m glad that I stayed.”