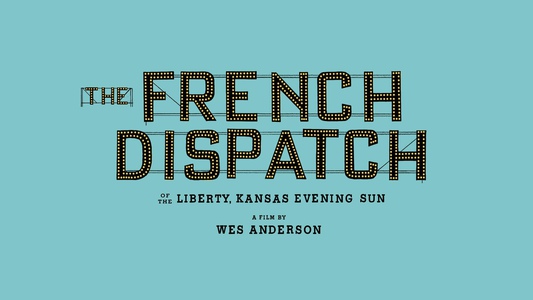 After garnering a nine-minute standing ovation at Cannes, UT alumnus Wes Anderson’s “The French Dispatch” will release in theaters Oct. 22. Set against the fictional yet fantastical French city of Ennui-sur-Blasé, the film centers around an eclectic group of expatriate journalists writing for the “French Dispatch.”

Split into three “articles,” each part of the film takes the viewer into separate stories, making it feel like they’re reading through an issue of the French Dispatch. The journalists, J.K.L Berensen (Tilda Swinton), Lucinda Krementz (Frances McDormand) and Roebuck Wright (Jeffrey Wright), cover topics such as modern art, politics and culinary reviews. Arthur Howitzer Jr. (Bill Murray), the stoic yet endearing editor in chief of the paper, edits each essay, and without fail, imparts the same sage line of advice: “Just try to make it sound like you wrote it that way on purpose.”

Anderson’s wonderful, idiosyncratic framing and distinct visual motifs shine through each vignette, threading and connecting the narratives. While the film lacks a strong central story, Anderson proves that high-quality cinema doesn’t require a single plot. The complexity of Moses Rosenthaler’s (Benicio Del Toro) art in “The Concrete Masterpiece ” works in tandem with Anderson’s masterful ability to contrast the darkness of prison with hues of pastel red and pink. In a departure from his typical modes of artistic expression, Anderson opts for an animated car chase sequence in “The Private Dining Room of the Police Commissioner ” replete with fantastical shades of blue and yellow, elevating the frigid atmosphere of provincial France.

In a film chock-full of deeply flawed yet relatable characters, Jeffrey Wright delivers a poignant performance as Roebuck Wright, the decidedly reserved culinary journalist. A mix of author James Baldwin and The New Yorker contributor A.J. Liebling, Wright’s thoughtful demeanor and troubled past enchant both his fictional editorial and physical audiences. One doesn’t need to possess any prior knowledge of the culinary arts to connect with Wright. His command of writing allows him to create a story that transcends genre by connecting with the humanity of his readers.

While the film’s structure may seem like the most ambitious undertaking of Anderson’s career, the massive ensemble cast says otherwise. The tweed suit-wearing director brings back frequent collaborators, including former UT roommate Owen Wilson, Adrien Brody and Willem Dafoe. While Brody shines as a crookedly lovable art connoisseur, Wilson and Dafoe, along with many A-listers, play seemingly insignificant roles. However, each actor approaches their role, no matter how small, with such vigor and authenticity that they leave a long-lasting impression on the viewer.

“The French Dispatch” sets itself apart from Anderson’s other filmography with its colossal cast and evocative performances. The lack of a cohesive plotline allows for an anthological presentation of three distinct stories that exude the intensity of the human experience and the comfort offered by the written word.