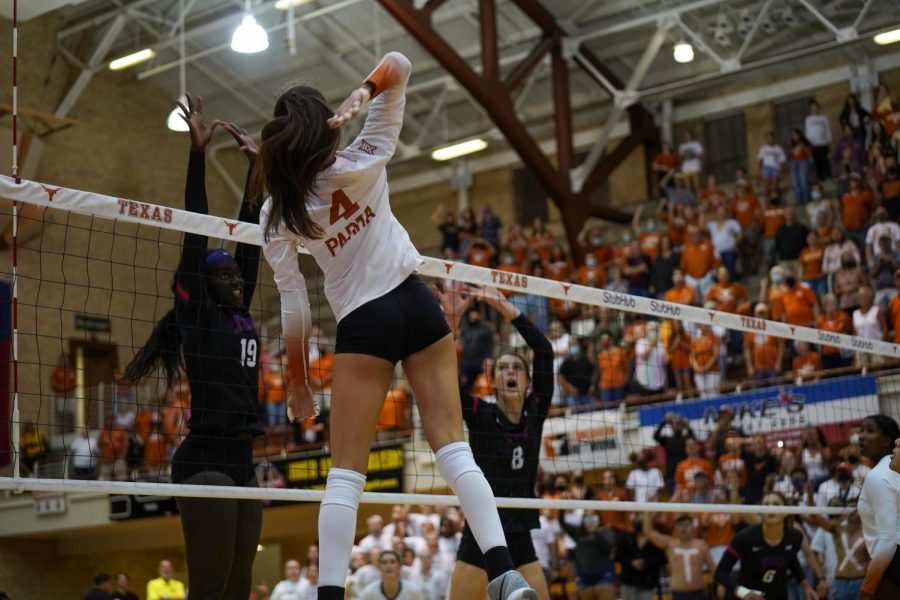 A new dynamic is emerging for Texas volleyball this season as the Longhorns incorporate rising players with stars of past seasons.

Almost all of Texas’ key players returned this season to chase a championship with Texas volleyball. Senior Brionne Butler is in her fifth season with Texas after a redshirt freshman year, and juniors Logan Eggleston and Jhenna Gabriel have been taking the court with Texas since 2018. While these players remain an essential part of the team’s success, new players like sophomore Melanie Parra have added a new set of strengths.

Parra, who is set to play as an outside hitter but has spent most of her time as a defensive specialist this season, has helped Texas rank third in the nation for aces per set.

“(Parra) is an impact player because of her serve, and her ability to ball control,” head coach Jerritt Elliott said. “Her touches are very clean, but her service, when it’s on, may be one of the best serves in the country.”

Parra herself is ranked fourth in the nation for aces per set, the only sophomore to make it in the top 10. Elliott said for Parra and in general for the team, he will continue to work on first touches and defensive play.

The Texas team also introduced junior setter Saige Ka’aha’aina-Torres to the court this fall, who transferred from the University of Utah. While Ka’aha’aina-Torres has yet to see much action, the setter had three kills and nine assists in the Longhorns’ last game against TCU. Elliot said she is still getting used to the tempos and different systems at Texas, but is “getting better week to week.”

Elliott said introducing the new setter has also pushed long term setter Jhenna Gabriel to some of her best work during her time at Texas.

Texas will need the new stars as Elliott announced on Monday that Butler will likely move on from the Longhorns next year. Butler became a first-team AVCA All-American last year, and although she would be eligible for one more year at Texas, Elliott said she will likely head to a professional league. However, Elliott said team captain Eggleston will remain at Texas as she pursues her masters degree.

Sydney Peterson, who has played libero and defensive specialist at Texas, is likely also in her last season.

“She’s been great as kind of a silent leader within our program,” Elliott said. “She shows up everyday to work and she’s made us the program that we are today.”

While Texas volleyball stays strong across the board, junior Skylar Fields has also emerged as a clear leader on the team. Fields has been recognized multiple times this season as Big 12 offensive player of the week and AVCA national player of the week. In a tight match against Kansas in early October, Fields had 26 kills which were integral to their victory.

“Skylar has really improved her game at a high level,” Elliott said.

The Longhorns finished just short of a national championship last season. This year, they brought everybody back in hope for another title bid, and improvement from Fields and others could prove crucial.

But it could be the newcomers, Parra and Ka’aha’aina-Torres, that push Texas to the top.