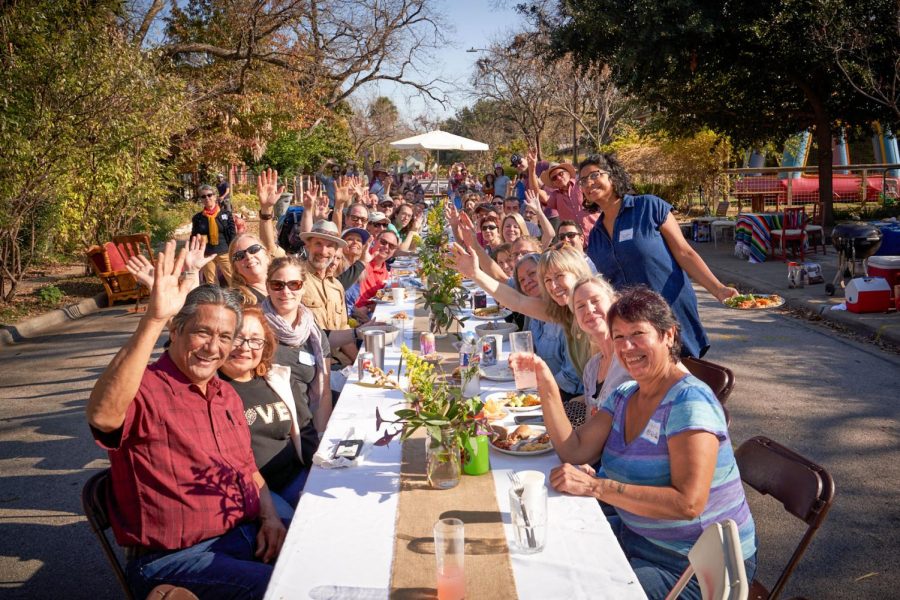 Sitting on her porch in Hyde Park, Texas, Deaton Bednar admires the lively scene: kids creating chalk murals in driveways, parents playing hopscotch with their kids and neighbors playing basketball in the street.

“It’s just a joyful thing, and it makes me happy to see people get outside,” Bednar, a Hyde Park resident for 27 years, said. “If we had no more concrete the rest of my life, I would be thrilled.”

In August 2020, the City of Austin installed barricades on Avenue G to make it a “Healthy Street,” where part of the street got blocked off to create a safe outdoor space for families. Healthy Streets began in response to the COVID-19 pandemic because gathering outdoors posed a smaller virus transmission risk. Walk Austin, a nonprofit supporting Healthy Streets, now promotes a petition to gather support for a more long-term initiative called Austin Living Streets.

“I am advocating for neighbors and other neighborhoods to be able to do what we can do,” Bednar said. “If the neighborhood wants to get together and create something more than a street that is just concrete and cars (whizzing) by … I want them to be able to apply for a permit and get that.”

“Living Streets is really the turnaround that starts moving us back to a time where streets are for everyone and you can use the street as long as you don’t create danger for other people,” Greenfield said.

So far, over 840 people signed Walk Austin’s petition to implement Austin Living Streets, a little over halfway to the organization’s goal of 1,600 signatures. Bednar said she signed the petition because she enjoys how Healthy Streets brought the community together.

“I became a supporter because I started seeing, about a month in, what a magic thing it was,” Bednar said. “There were no cars going fast on our street. There were people with dogs and old people and a roller skating team … and people were happy.”

Clinical professor Heather Way, who studies community development, said Austin Living Streets could improve Austin’s quality of life by providing access to outdoor spaces where community members can connect. However, she said she wants the program to use more permanent barricades.

“I do think a model that the city is moving towards is a more compact and connected city with denser housing,” Way said. “If we’re going to do that, we do have to think more creatively and really change the paradigms we have around public open space. I see something like a living streets program as a really important part of that.”

Austin Living Streets’ website says they hope to serve people of all abilities and socioeconomic statuses. Greenfield said he wants to help people who can’t watch their kids because of work by letting their kids play outside on a blocked off road while a neighbor watches.