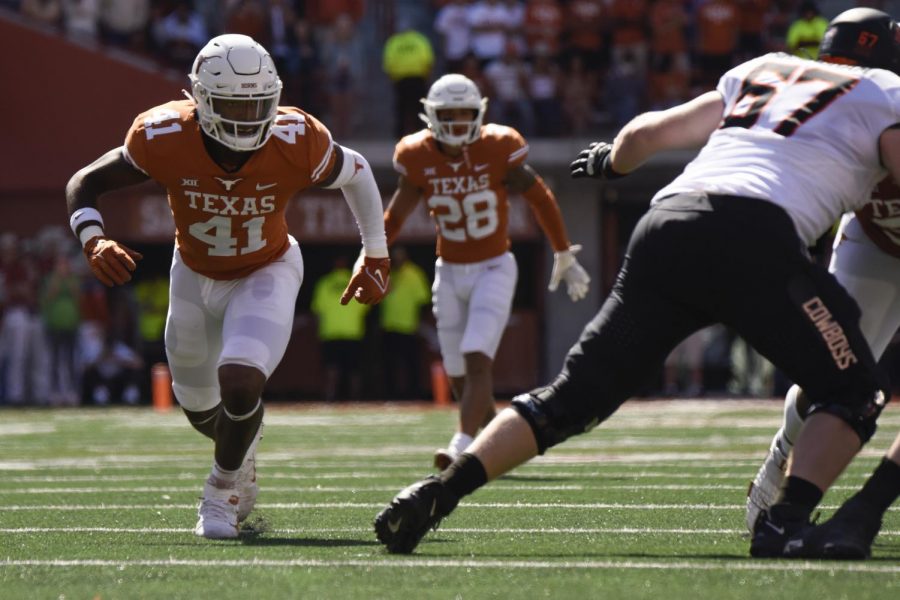 Texas hit the gas, taking the lead over Oklahoma State early in the first quarter only to run out of fuel in the second half for the second straight week. The Cowboys outscored the Longhorns 19-7 after halftime to bring home the win.

Bijan Robinson continues to be Texas’ saving grace. The sophomore running back played another solid game, scoring two touchdowns on the ground and one through the air. Robinson garnered his second most attempts in a game at 21 carries and rushed for 135 yards, just above his game average. Robinson is just 76 yards shy of reaching the 1,000 yard rushing mark total.

Jaylan Ford notched the most tackles in this game for the Longhorns and his highest number this season with 12. The sophomore linebacker also had one tackle for loss and a quarterback hurry. He displayed his defensive intelligence by stopping Oklahoma State’s two-point conversion attempt to tie the game in the fourth quarter by making an excellent read and forcing the tackle. Ford proved he deserves more playing time.

After hardly getting any looks in the beginning of the season, junior wide receiver Marcus Washington topped the game leaderboard with 60 receiving yards. The junior caught a 58-yard pass, his longest of the season, on a third-and-6 that put the Longhorns in great scoring position at the OSU 11-yard line. Washington is another player who could receive more touches going forward.

The Longhorns’ offensive line failed yet again to protect the quarterback and could not maintain the run block either. The Longhorns allowed three sacks and four quarterback hurries. Few rushing attempts through the middle were successful because the line did not open holes for the running backs. No matter how good the Texas rushers and receivers are, it won’t matter if they don’t get an opportunity to make a play.

Texas’ offense as a whole is becoming disjointed. Third down conversions fell to a meager 28.6 percent this game. Redshirt junior quarterback Casey Thompson threw for his second-worst passing percentage on the season. Thompson also threw two interceptions: a pick-six returned for 85 yards in the second quarter and another at the end of the fourth quarter that sealed the Longhorns’ fate. The play calling needs revamping. Teams know that Texas will likely run on the first two downs and are then forced to throw on third down. The run-first offense can still be the Longhorns’ mentality, but tinkering with the overall game plan could be beneficial.

The Longhorns sputtered out — again — in the second half and could not put a stop to the Cowboys’ offense. Oklahoma State ran 22 more plays than Texas, and five penalties for 65 yards were committed by the Texas defense. The Longhorns’ defensive mentality was nowhere to be found.

Entering the bye week with back-to-back losses may end up doing more harm than good for the struggling Texas team. The off week will be a chance for the Longhorns to rest, regroup and reevaluate their scheme.

Texas fans will most likely see more games like those against the two Oklahoma teams of the past two weeks. Unless the Longhorns utilize their week off to make some serious changes, Texas could be in for another underwhelming season.

However, three losses does not mean the Longhorns’ season is over. While the offensive line rotation hasn’t proved beneficial, fundamental changes on the defensive front and with play-calling on offense could provide a needed spark. If Texas creates a more cohesive and creative offensive scheme, and if the defense can remain focused for a complete game, there may be a chance at salvaging the season.