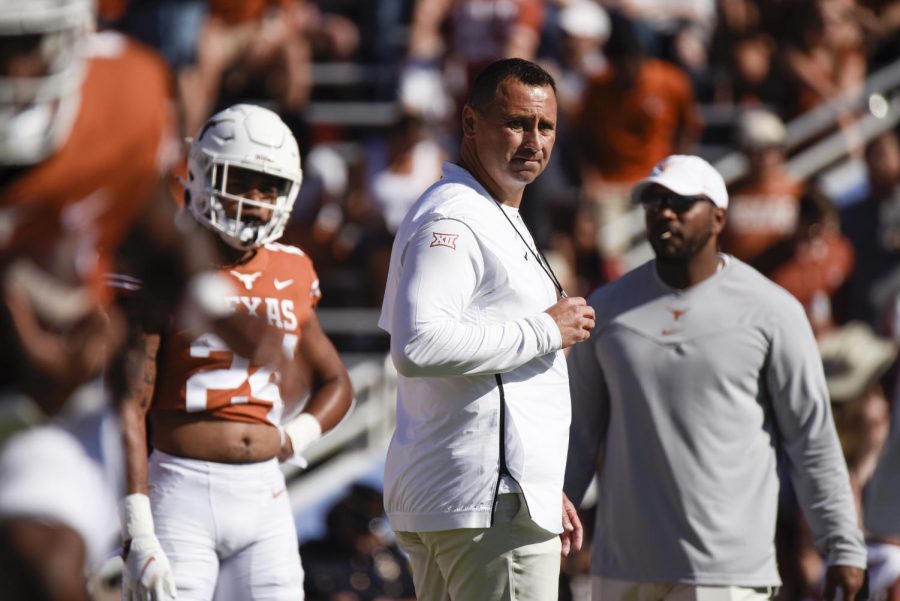 Nathan Han: This bye week came at a much-needed time not only for Texas, but also for us. I’ll certainly be sleeping in and enjoying the weekend off before heading to Baylor for yet another 11 a.m. kickoff. But what do you think head coach Steve Sarkisian and the Longhorn football team need to spend their extra week working on after the last two losses? What should be priority No. 1?

Matthew Boncosky: There’s clearly a mental block that’s preventing Texas from finishing off winnable games right now, and Sarkisian knows that. Fixing that is the top priority. He talked at length Monday about trying to pinpoint exactly where those mental lapses stem from psychologically and working through them so Texas can have a successful second half of the season.

While Sark doesn’t have the depth he would like in the trenches, there’s no shortage of talent at the skill positions on Texas’ roster. That’s been evident in the way the Longhorns have come out swinging, getting out to multi-score leads early in the past two games. Despite Texas’ struggles, sophomore running back Bijan Robinson continues to get potential Heisman buzz for his performances and junior quarterback Casey Thompson has, at times, excelled this year, like his five-touchdown performance against Oklahoma.

There’s no question the two previous losses to Oklahoma and Oklahoma State could have been wins if the Longhorns had the mental focus to finish out those games strong. But they weren’t, and Sark must dig deep to fix the Longhorns’ mental struggles.

Aside from the physiological side of things, there have been some interesting Xs and Os decisions made in the past two games as well, particularly the constant tinkering with the offensive line even late in the game against Oklahoma State. What were your thoughts on the personnel changes, and do you think Texas found a group of five linemen that it likes going forward?

NH: I’m not a fan of the constant substitutions on the offensive line. One of the biggest issues both Thompson and Robinson talked about after Saturday’s loss was failing to pick up Oklahoma State’s blitzes and poor communication up front.

Texas had already been struggling with picking up the correct assignments in pass protection this season. That becomes even harder when offensive lineman are switching in and out, and players are moving positions across the line not just from game to game but from drive to drive.

Oklahoma State does have one of the best defensive lines not only in the Big 12 but in the nation, and Cowboys defensive coordinator Jim Knowles dialed up complicated blitzes at the right time on Saturday. Injuries to super senior left guard Denzel Okafor and redshirt freshman center Jake Majors didn’t help, either.

But the one thing Sarkisian and offensive line coach Kyle Flood can do moving forward is keep a consistent starting five and allow that group to try and build chemistry, especially with an extra bye week to bolster that communication.

Is there anything Sarkisian can do to nullify the effect of a struggling offensive line when it comes to play calling? Why do you think this team has struggled so much on offense in the second half, outside of mental focus?

MB: I would love to see Sarkisian get more creative with his play calling, especially when the offense struggles with consecutive three-and-out drives. All we heard about him coming over from being Alabama’s national championship winning offensive coordinator was how marvelous of a play caller he is. He always found ways to get the ball into his top playmakers’ hands at Alabama, whether that was running back Najee Harris or wide receiver DeVonta Smith.

Sarkisian was asked about running gadget or trick plays after the Oklahoma State loss as a way to jump-start the offense when the line is struggling both in run blocking and pass protection. He seemed a little timid, suggesting the old mantra that everybody loves those plays when they work but hates them when they don’t, but I say go for it. The offense is already struggling, at that point what else does he have to lose?

Part of his answer was about wanting to get the offense executing like it normally should when it’s struggling, but it’s hard to execute when your offensive line can’t block anybody. In this day and age, teams can live with defensive lapses and overall poor play on that side of the ball, but if you can’t respond on offense it’s over. To me, the offensive line’s poor play is the biggest reason outside of mental focus why Texas is struggling to finish games.

As we head into the second half of the season, how do you think the Longhorns will respond to back-to-back debilitating losses?

NH: Sarkisian has said all the right things about responding to the losses. So have the players. But when it comes down to it, we’ll only really find out how this team will respond when it’s faced with another tough situation or another potential second half comeback bid from an opposing team.

That next test will come on the road against No. 20 Baylor on Halloween weekend. But as many times as I’ve predicted against the Longhorns this season, I think they’ll bounce back from the last two losses. No. 3 Oklahoma and No. 8 Oklahoma State are two tough teams to beat that have found ways to win even if the margin of victory hasn’t been perfect.

For the rest of the regular season, I think Texas will finish 5–0 and end with a 9–3 record.

MB: I think Texas will lose once more to either Baylor, Iowa State or Kansas State to finish 8–4 heading into bowl season.