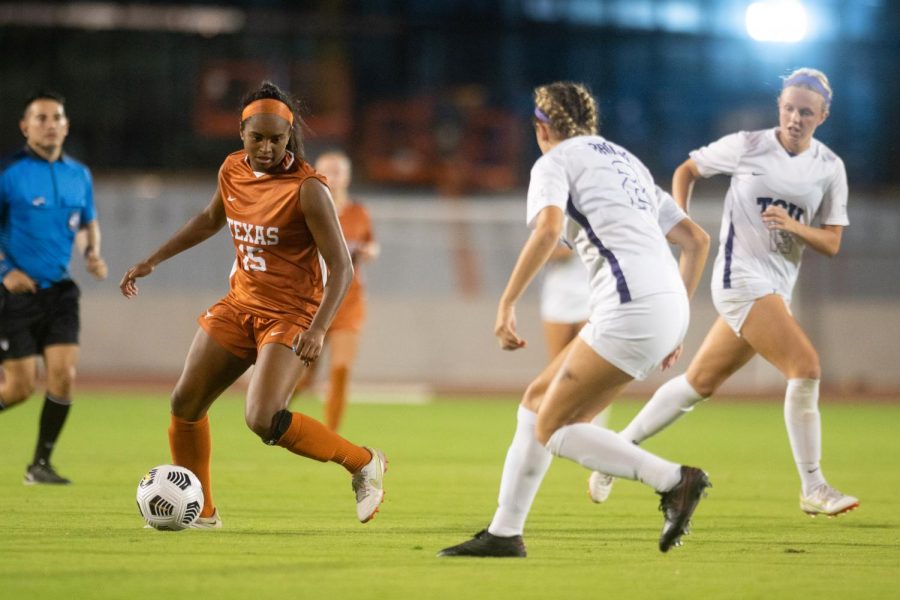 If I told you that the Texas women’s soccer team would be leading the Big 12 one month ago, you would have called me crazy.

With three games left in the regular season, the surging squad is holding a narrow lead over TCU for first in the conference.

How did Texas get here?

During an uninspiring 2-3-2 start to the season, the rotations in the games were a major question. In losses to UCF and No. 11 Georgetown, head coach Angela Kelly brought seven different players in to substitute her starters. In a tie against Florida, Kelly used six different subs.

The Longhorns seemed to be enduring an identity crisis.

Kelly was left with two options: continue giving her more experienced players playing time or hand the keys to the extremely talented, albeit inexperienced, freshmen duo of Trinity Byars and Lexi Missimo. Kelly chose the latter.

In her first five games, Byars had only exceeded 90 minutes of playing time once against then No. 13 Rice in a game that went into overtime. Her playing time in the first seven games of the season was often sporadic, with her minutes dipping to as low as 61 in a 3–0 exhibition win against Abilene Christian University.

Since its nail-biting loss to Oregon Sept. 9, there has been a noticeable shift in Texas’ rotations. Rarely, if ever, does Kelly pull Byars or Missimo out of the game anymore. And the Texas offense has improved significantly as a result.

Byars recently had an eight-game scoring streak, tied for second in Texas history, with the streak ending after she failed to score against Baylor last Friday. Missimo has regularly scored points in bunches for the Longhorns too, including a game against UT-Rio Grande Valley in which she scored four goals and another game against Oklahoma in which she tallied four assists.

The Longhorns are undergoing a youth revolution, and the key to winning that revolution is to give these players the minutes they need to develop.

Mistakes due to inexperience have been common for Texas. Rather than making the extra pass to a teammate with a better angle, many Missimo shots have sailed far over the goal. Byars has dealt with many offsides penalties this year that have nullified potential scoring opportunities. With the talent that these players have, it is vital to accept mistakes as part of the player maturation process and utilize them as a teaching opportunity. And Kelly has done just that.

As a result, both players improved at a far faster rate than anyone could have imagined. Missimo and Byars, who were recently named the top two freshmen soccer players in the country by Top Drawer Soccer, are firmly in the driver’s seat for the Longhorns now.

As conference play wraps up, Texas will look to continue its momentum after a nine game win streak.

Its next opportunity will be against West Virginia Thursday. The Mountaineers fell out of the top 25 and are currently struggling after losing two of its last three games. Texas will attempt to assert its dominance early on by playing hard and fast.

With Big 12 standings being determined by points-per-match, Thursday’s game will likely feature unrelenting attacks by both sides, as winning isn’t enough to secure the title this year.

The blossoming offensive talent the Longhorns have at their disposal will build confidence about their chances as they enter the stretch run for the crown.