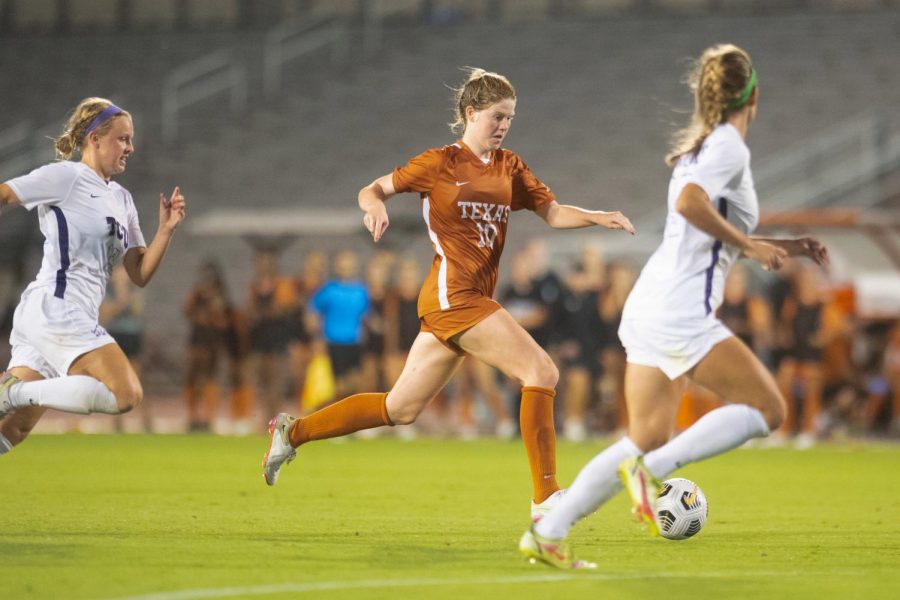 Here are some of the most exciting matchups for the upcoming week in Texas athletics:

Texas women’s soccer will look to capitalize on its current momentum this Thursday against the Mountaineers, as the Longhorns climbed up to the No. 21 spot in the latest United Soccer Coaches rankings.

Texas is currently 8-3-4 on the season and 4-0-2 in conference play, having yet to lose a game against a Big 12 opponent this year. The Longhorns are coming off of a grueling game in Waco against Baylor, having tied the Bears 0-0 after two overtime periods. Baylor doubled Texas’ shots on goal, but fifth-year goalkeeper Savannah Madden kept the Longhorns in the game with an incredible eight saves.

Texas will look to have a more convincing showing against West Virginia, a team led by redshirt senior forward Lauren Segalla and senior midfielder Isabella Sibley. These two players have combined for over a third of their team’s goals this season, while Sibley herself scored two goals in the Mountaineers’ latest win against Texas Tech. Preventing these two players from making an impact will be key to the Longhorns’ success.

Getting the ball to star freshman midfielder Lexi Missimo will continue to be Texas’ gameplan, as she still leads the team in goals and assists on the season. Lately, freshman forward Trinity Byars and senior midfielder Julia Grosso have led the charge, with the two combining for half of the Longhorns’ goals and four assists over the last five games. Getting all three players more quality looks at the goal will be important if the Longhorns want to go home with a win on Thursday.

Texas softball hosts a double-header on Saturday, as the Longhorns are set to square off against Temple College followed by UTSA. These are the last two games of fall softball for the Longhorns, as they will take the rest of the calendar year to prepare for the upcoming spring season.

Even if these games aren’t the biggest marquee matchups out there, Saturday is the last shot to catch the Longhorn softball squad in action this fall.

Texas soccer plays again Sunday against the Oklahoma State Cowgirls, a team that sits at 7-5-2 on the season and 2-2-1 in conference play.

While Oklahoma State might not be the strongest team that the Longhorns have faced recently, it isn’t a team that Texas can afford to take lightly. The Cowgirls are led by junior midfielder/forward Olyvia Dowell, who leads the team in goals, assists and total shots. The Oklahoma State offense isn’t very potent, having only scored six more goals than its opponents on the year. Shutting down Dowell should have a huge impact on the Cowgirls’ ability to keep up with Texas’ scoring ability.