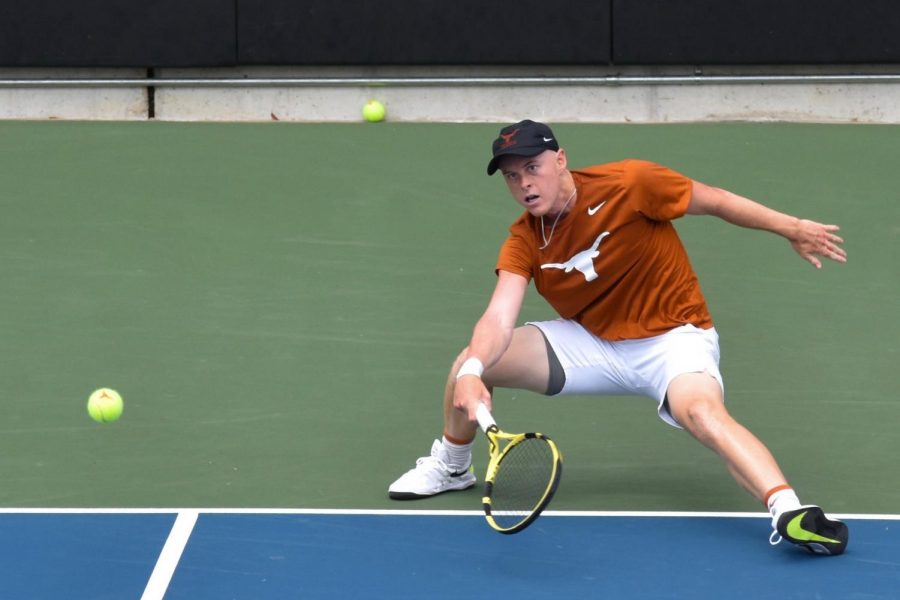 After an electric run, senior Richard Ciamarra and sophomore Cleeve Harper advanced to the doubles finals of the ITA Texas Regionals.

In the doubles finals, the duo of Ciamarra and Harper competed against TCU’s Lui Maxted and Pedro Vives in an exciting match.

After trading sets, Ciamarra and Harper played a third-set superbreaker Monday. Despite trailing early 5-2 in the super breaker, the duo rallied back to tie the set at 6-6.

After a fantastic comeback, the Longhorns were finishing off the weekend with a potential finals victory.

The Longhorns and Horned Frogs continuously traded points for the rest of the matchup, both schools fighting for the win.

Towards the end, TCU finally gained a 9-8 lead scoring the final point to secure a win.

Even though the duo of Ciamarra and Harper ended up losing the match, they made an amazing run to the finals. The Longhorn team consecutively defeated duos from Texas A&M, Abilene Christian University, SMU and TCU to get to the finals.

Playing against the best that Texas has to offer, Ciamarra and Harper proved themselves as worthy opponents. The duo hopes to continue their success at the ITA National Fall Championships in San Diego.

But Ciamarra and Harper weren’t the only Longhorns to come back to Austin with success.

Standout sophomore Micah Braswell built on his previous success and advanced to the singles semifinals.

Braswell entered the tournament as the No. 5 seed. Early on in the singles main draw, he lived up to his standing, cruising past players from Baylor and TCU.

In the singles semifinals, Braswell was set to face his third TCU player of the bracket, Juan Carlos Aguilar.

Braswell took the match against Aguilar to three sets, winning the first and losing the second. The sophomore started off strong in the third and final set, gaining the upper hand with a 3-0 lead. Unfortunately, Aguilar bounced back and took the set sending TCU to the singles finals.

The Longhorns will fly to San Diego Nov. 4, where they hope to continue improving on their fall season and success.