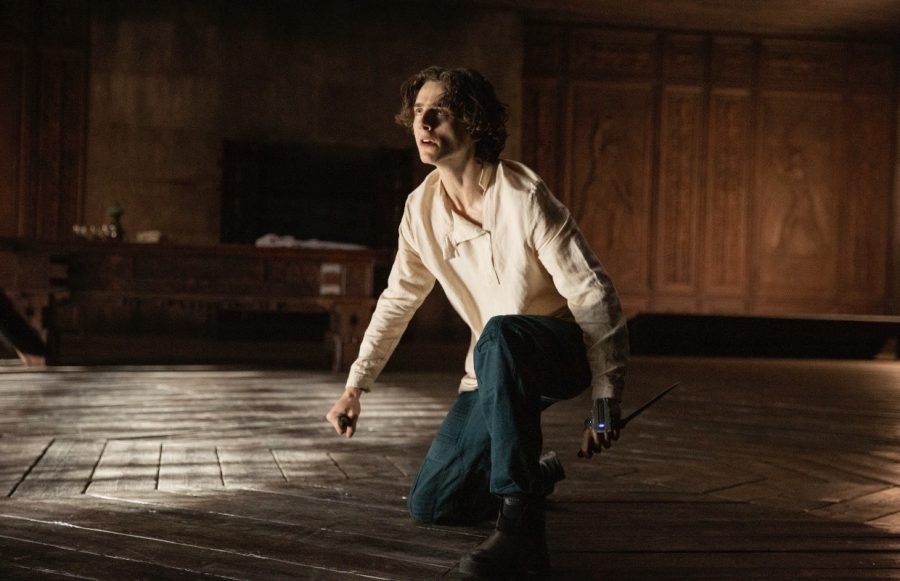 Directed by visionary Denis Villenuve, “Dune” is an adaptation of Frank Herbert’s 1965 science fiction novel of the same name. Traveling to the dangerous planet Arrakis, a young man, Paul Atreides (Timothée Chalamet), and his family take over the “spice” mining business. Deep within the sands of the planet lies a resource powerful enough to fuel space-travel. Competing with the treacherous “Fremen” that inhabit the planet and other ruling families, Paul uncovers a powerful truth about his destiny on Arrakis.

Sporting a cast of Oscar Isaac, Zendaya, Jason Momoa and Dave Bautista, “Dune’s” stellar cast certainly stands out. Unfortunately, many of these incredible performers are minimally used despite what the film’s advertising campaign might try to swing. Momoa frequently pops up throughout the narrative, adding a fun bro-mance dynamic with Chalamet’s Paul. Chalamet nails the mysteriousness and curiosity of his leading character, additionally flexing his acting chops with impressive emotional moments and action set pieces. Rebecca Ferguson’s performance as Lady Atreides plays well off of Chalamet, but Zendaya isn’t in the film nearly enough to showcase her incredible acting abilities.

“Dune’s” biggest sin is when it forgets to be entertaining. So much of Villeneuve’s science fiction epic is devoted to hinting at something much cooler that won’t even happen within the film. When the title pops up at the beginning, followed by a “Part One” — purposely left out of any marketing — it’s evident that this will be an incomplete narrative. Having multipart film storylines isn’t new to the industry, yet these are only as effective as the amount of plot progression in each chapter. Unfortunately, “Dune” only scratches the surface of its compelling world, stopping the plot right when it begins to get interesting.

While its extensive lore is surprisingly well-explained to viewers not familiar with the novel, “Dune” still gets lost in its own world; ruminating through scenes that are painstakingly boring. Not even the charm of Chalamet or the film’s exciting cast can make some of these sequences even the slightest bit entertaining. While multimillion dollar setpieces spice (see what I did there?) up the mundane plot, the intensity of the narrative never reaches full intriguing potential.

“Dune’s” strongest asset? The mesmerizing set design and cinematography. Villeneuve and team have conjured a beautiful visual palette, grounding the world of Herbert’s novel in reality. The exteriors and interiors of the various locations and ships throughout the film’s plot are intricately designed. The fully-realized science fiction environment provides an exciting playspace for the strong cast to interact in.

Overall, Villeneuve takes a big stride with “Dune,” most likely appeasing die-hard fans of its sprawling legacy. However, for most moviegoers, “Dune” will unfortunately feel like watching super expensive paint dry.