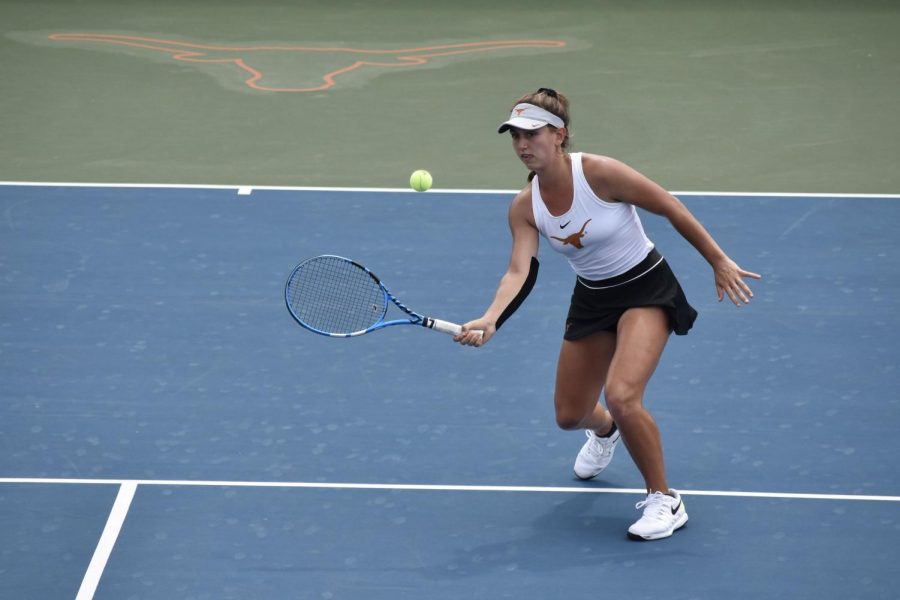 Kylie Collins claimed the singles title at the Intercollegiate Tennis Association Texas Regionals on Monday. The sophomore took the victory over Baylor’s No. 9 Alicia Herrero Linana in two sets, 6-4, 6-4.

Collins came in as the No. 5 seed and won six consecutive matches. Five of those matches were in straight sets and four of them were against seeded opponents.

In the Round of 64, Collins won 6-4, 6-4 against Deniza Marcinkevica from Tarleton State. She also played in the Round of 32 on Friday and took the win over Baylor’s Ana Carmen Zamburek 6-3, 6-2.

Sunday featured Collins’ semifinal match against Melany Krywoj from Baylor. This 6-2, 6-2 victory secured her spot in the championship game.

Rapolu made it all the way to the semifinals, but lost 6-3, 7-5 against Linana from Baylor. Chavatipon dropped her Round of 16 game 6-1, 7-5 against Texas A&M’s Mary Stoiana, who Rapolu went on to beat in the quarterfinals.

In the doubles draw, Collins and Chavatipon made it to the doubles semifinal, where they lost 7-6 (7-3), 6-4 against Tatiana Makarova and Jayci Goldsmith from Texas A&M. Sophomore Simran Kortikere and junior Gabby Cusano did not advance out of the Round of 32. Allura Zamarripa suffered an injury in her singles match, so she and Bella Zamarripa were unable to compete in doubles.