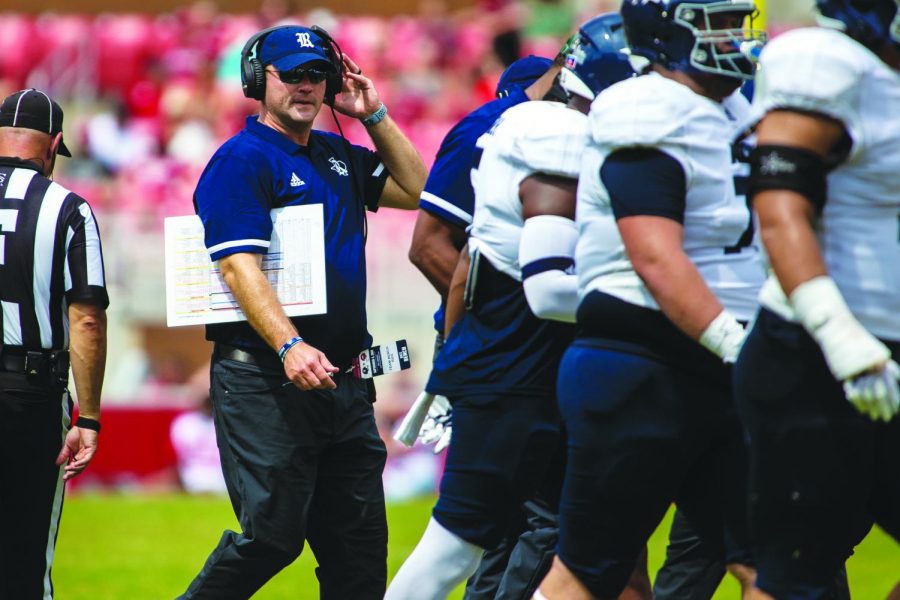 Rice hopes to secure its first win of the season under head coach Mike Bloomgren’s fourth season leading the Owls. Bloomgren looks to replicate the glimmers of success that Rice displayed against a struggling Texas team in last year’s shortened pandemic season.

While Texas is no longer a struggling team under Herman, Bloomgren and the Owls have the upperhand in defeating a Texas team coming off a tough week two loss. During Bloomgren’s first three seasons at Rice, the former Stanford offensive line and offensive coordinator hasn’t seen success many Owl faithful have hoped for. Rice owns a mere five combined wins from the past two seasons — two of which came from a shortened five-game season in 2020.

Accolades and achievements for Bloomgren are anything but few and far between. Prior to his move to Rice in 2017, Bloomgren coached 12 future NFL Draft picks and 11 All-American athletes. Under Bloomgren’s direction in 2012, the former Cardinal coach paved the way for four of Stanford’s five starting offensive lineman to earn All-Pac-12 honors.

Bloomgren endured expansive success alongside players like NFL notables Andrew Luck and Christian McCaffrey, where the now-head coach was pivotal in Stanford’s powerful 2015 season and Luck’s 2011 campaign. Under Bloomgren’s offensive lead, Stanford boasted multiple record-breaking players on the offensive side of the ball as the Cardinal steamrolled their way through the Pac-12 and secured a championship win against USC. In the postseason, Stanford amplified its prior victory by defeating Iowa in the Rose Bowl, capping the Cardinal season at an impressive 12–2.

In 2015, McCaffrey — an eventual Heisman Trophy finalist and first round NFL Draft pick — set the single-season all-purpose yards record previously held by NFL Hall of Famer Barry Sanders. The Cardinal’s record-setting 2015 season would have been nonexistent without Bloomgren’s offensive finesse and devotion to the men up front.

The Stanford offensive line thrived with players like Outland Trophy winner Joshua Garnett. Garnett also won the Morris Trophy and was recognized as both the nation’s top interior lineman and the Pac-12’s best offensive lineman in 2015.

Blooomgren’s past success combined with Rice’s current depth charts could lead to a Longhorn defeat come Saturday. The Owls have all but three starters returning from the 2020-2021 season, giving Bloomgren’s program a mature advantage. The experienced roster will no doubt make its way to Austin to focus on a high-risk game for both programs.

The Longhorns’ struggles on the defensive side of the ball against Arkansas in week two will no doubt be a target for Bloomgren. In week one, Bloomgren and team faced the Razorbacks in

Fayetteville, giving the head coach an advantage to prepare through comparison. While Rice left Arkansas with a loss, the Razorbacks’ run attack proved to be too much even for Texas’s front seven. By the end of the night, Arkansas had posted over 300 yards rushing on its way to a 40-21 win over the Longhorns.

With Texas’ potential defensive weakness in mind and Bloomgren’s extensive experience with NCAA and NFL offenses — the O-line, specifically — Bloomgren’s key to keeping Texas on its toes is to literally hit the ground running.

An Owls loss on Saturday could put offensively-minded Bloomgren on thin ice as Rice would fall to 0–3 on the season. Bloomgren’s hopes are high to enhance his program’s record to 1–2, giving Texas head coach Steve Sarkisian and the Longhorns a loss.