Notes from the opponent: Sitting down with Rice football beat reporter 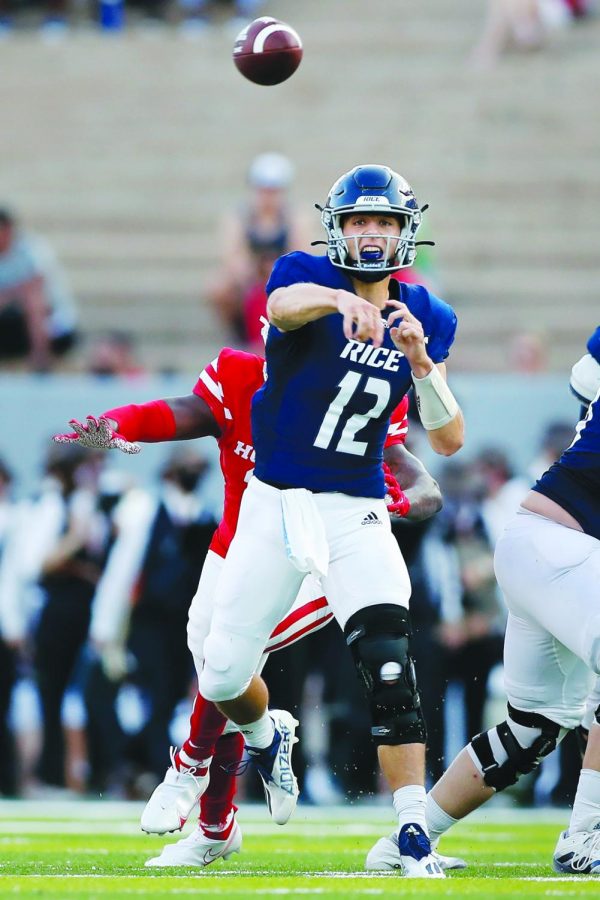 The Daily Texan: Has Hurricane Nicholas’ impact been felt on the Rice football team?

Pavithr Goli: I don’t think the hurricane really affected anything, except for no practice on Tuesday because the rain really picked up on Monday night. But, I feel like missing practice was pretty big for Rice. They do need a lot of practice.

DT: While Texas has its own ongoing quarterback question, what’s the situation at the quarterback position like at Rice?

PG: So, we started off with Wiley Green. He’s a redshirt sophomore who had the starting role last year, but then he lost it to a graduate transfer. The grad transfer left, so Green was given the starting job this year. He was competing with Luke McCaffrey, (NFL star) Christian McCaffrey’s younger brother who transferred from Nebraska.

In the first game against Arkansas, he looked good until the second half. Then, Green threw three interceptions and looked like he was unable to run the offense. So, Rice head coach (Mike Bloomgren) was trying to give Luke McCaffrey reps. Every third drive against Arkansas, Luke would take charge of the offense.

Then, Bloomgren named McCaffrey the starter against Houston (in Week 2). And to be honest, he did not play well. He threw two picks in the first half and then a pick-six to end the game.

DT: Has Bloomgren named a starter for Saturday, and who do you think will get the nod to start against Texas?

PG: I personally don’t even know who’s going to start against UT, but I think Coach Bloomgren really likes McCaffrey because he can run and he can pass. I guess it’s taking the best of two bad options. McCaffrey is a

DT: What has Bloomgren said about facing an opponent with the recognition and stature of Texas?

PG: First of all, Bloomgren was shocked that Rice lost to Houston 44-7. He started the press

conference just in shock, but he didn’t really dwell on it. One main thing he did say was something like, ‘Yeah, we have a Power Five, future SEC opponent we’re going to face next week, but we have bigger problems … in our squad itself.’ So, I don’t think he’s really focusing as much on Texas, on the opponent, (as much as he’s) focusing on his team and fixing those mistakes.

DT: What are some Owl names to watch out for on Rice’s squad?

PG: On offense, a name to watch is Khalan Griffin. He put up (between) 80 and 90 yards rushing against Houston, and he’s our main source of offense on Saturdays. Also, look out for Luke McCaffrey when he runs the ball. He’s pretty smooth with it in his hands.

DT: What’s going to be the biggest factor for Rice in Saturday’s game against Texas?

PG: I think it all comes down to the offense. Our defense is pretty solid — they have a lot of seniors, a lot of experience and it’s a solid Conference USA defense. But they’re always on the field. If the offense was able to convert third downs, the defense wouldn’t be tired all the time. The defense wouldn’t be on the field all the time. In the Houston game, you could see that the defense just ran out of gas in