Second half struggles: How Texas can use bye week to fix issues 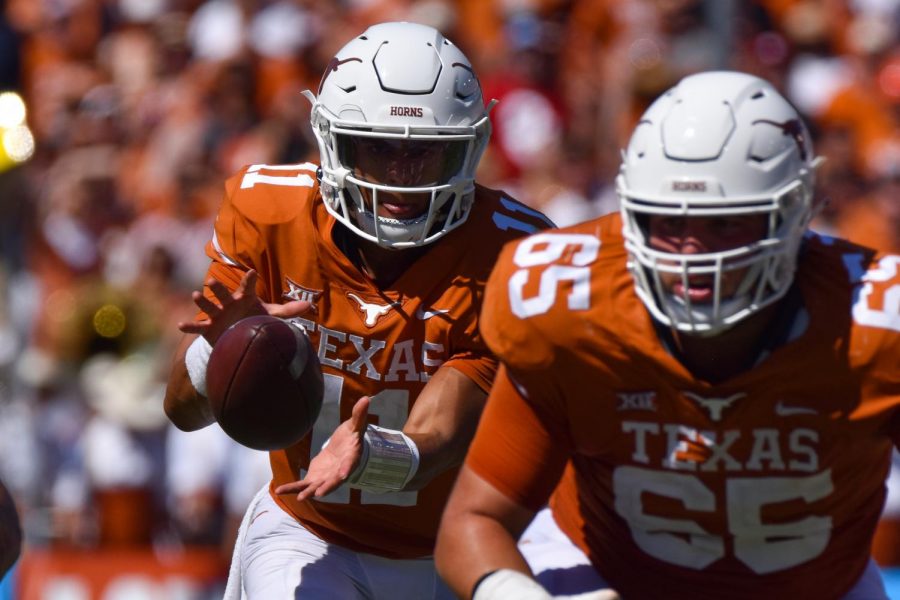 Over the last three games, the Longhorns scored a total of 26 points in the second half. They escaped against TCU due to sophomore running back Bijan Robinson’s heroic performance. Then, they lost two straight games due to offensive struggles in the second half.

As Texas heads into a bye week, it’s up to head coach Steve Sarkisian and his staff to fix offensive inconsistencies and figure out how the offense can put together two strong halves of football.

What do the Longhorns do well offensively?

To figure out what the Longhorns have been doing wrong in second halves, it’s important to analyze what they have been doing well to attain their massive leads. The consistent theme of successful Longhorn offensive drives is their ability to establish the run and use that to give redshirt junior quarterback Casey Thompson easy passing lanes down the field to gain chunk plays. In addition, Sarkisian has utilized screen passes, run-pass options and misdirection to get the ball in the hands of their playmakers and keep opposing defenses guessing.

When the offensive line is performing at a high level and Bijan Robinson is doing Bijan Robinson things, it opens up the whole playbook for Sarkisian. Texas is averaging 41.6 points and 229.9 rushing yards per game because of this formula.

So what keeps happening in the second half?

There have been a multitude of reasons behind why Texas has been struggling to move the ball in the second half. For one, the play calling has been conservative. Sarkisian hasn’t figured out how to call a game when trying to maintain a lead, making his slogan, “All gas, no brakes,” quite ironic.

While Sarkisian’s play calling remains an issue, a more concerning problem is the inconsistency of the offensive line. The offensive line was running out different combinations of players in the second half of the Oklahoma State game in an attempt to find a group that was effective at creating lanes for Robinson. None of the groups were capable of winning against a veteran Cowboys defense, which led to the complete shutdown of the star running back in the second half. This put a lot of the weight on Thompson to step back, read the defense and make high caliber throws.

The quarterback has been very impressive thus far, but he doesn’t seem ready to be the focal point of an offense just yet. This was demonstrated when Texas was down a touchdown with the chance to tie the game against Oklahoma State. During the final drive, Thompson seemed unsure of his reads and was uncomfortable in the pocket due to poor pass protection. He threw an interception to senior Oklahoma State safety Tanner McCalister, who baited him into a bad decision. An improvement to the offensive line would give the Longhorns the balance they have been missing in the previous three second halves and take the pressure off Thompson.

What can the coaching staff do to fix the issue?

The bye week comes at a much needed time for the Longhorns. It is entirely possible that the two game slide can turn into a four game losing streak unless they figure out the offensive line issues against Baylor and Iowa State on the road.

Sarkisian and offensive line coach Kyle Flood need to find a combination of linemen that play well together. The lineup of junior Christian Jones at left tackle, junior guard Junior Angilau at left guard, redshirt freshman Jake Majors at center, senior Tope Imade at right guard and senior Derek Kerstetter at right tackle all played relatively well in the first half before struggling. This could potentially be the starting offensive line moving forward, as long as Sarkisian and Flood can get this group to play consistently. With more confidence in his offensive line, it is entirely possible that Sarkisian will feel more comfortable in expanding the playbook, being more aggressive and living up to the “All gas, no brakes” slogan from the offseason.